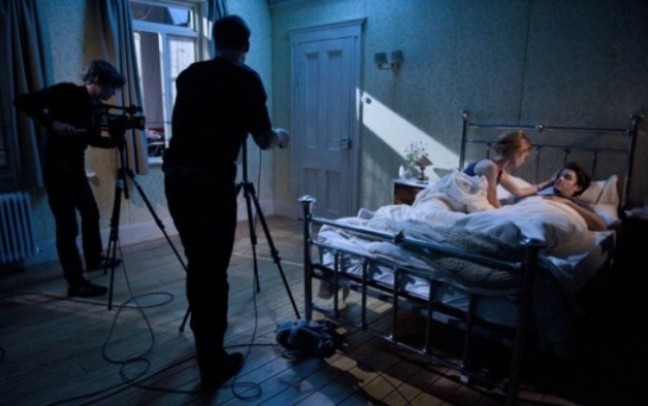 Regularly and repeatedly claimed by feminist critics, Charlotte Perkins Gilman’s nineteenth-century story The Yellow Wallpaper is not a text that begs to be updated. Synonymous with the oppressive patriarchy of its time, which condemned women such as the story’s narrator to a diagnosis of “hysteria”, the piece holds a central place within feminist literary histories – a place that might itself be an intriguing site for contemporary investigation. Instead, this new version from Lyndsey Turner and Katie Mitchell drags Gilman’s story into the present day, making explicit the then unrecognised post-natal depression that seems to be hinted at by the narrative. It’s both a fascinating and a frustrating move.

Transplanting Gilman’s troubled, restless narrator from a nineteenth-century American summer house to the German countryside of the present day, this dramatic reimagining very deliberately refracts the tale through later psychological lenses, rendering it into a modern study of depression. The originally nameless protagonist, now identified as Anna, is listless in the house her husband has brought them to for her recuperation, often in bed during the day, yet plagued at night by a conviction that something – or someone – is moving behind the wallpaper.

Mitchell’s approach to this story is a meticulously deconstructed one, breaking down her intricate, technically dazzling production into its individual components. The Schaubühne’s wide stage is dissected into three segments, above which a large, attention-stealing screen hosts projections of film being captured live by an intrusive crew of camera operators. Two of these divided sections of the performance space are given over to precisely detailed, almost identical renderings of the room in which the protagonist of the piece is confined, while the third is a closed-in box fronted by a large window, in which foley artist Cathlen Gawlich visibly creates the sounds that ripple through the production – footsteps, scraping, knocks at the door. Meanwhile a similar, smaller space encloses actress Ursina Lardi, a lone, starkly lit figure speaking into a microphone.

Through these mechanisms, the production depicts protagonist Anna’s anguished descent into madness in close-up, punishingly claustrophobic detail. From the moment she arrives at this room in a remote country house – and even before her entrance – every element of the place is heightened. The disturbingly enhanced sound effects, produced before our eyes, assault the ears, while the vivid wallpaper itself takes on a strangely disquieting pallor under Jack Knowles’ evocative lighting. As a psychological device, Mitchell’s technique is unnervingly effective. Not only does this approach give the audience startlingly intimate access to Anna’s own crisis; every dismantled element of the production repeats the feeling of being trapped, from the tightly enclosed space in which Lardi voices Anna’s thoughts, to the close, intruding presence of cameras, to the screens that periodically slide down to cut off sections of the stage.

In its technical allusions to thriller and noir, genres with which the piece thematically shares a number of features – the creepy house, the scent of mystery, the escalating urgency – the overwhelming presence of film amplifies this sense of unease. Throughout the production’s most disturbing sequence, as Anna tears frantically at the wallpaper, a camera pressed close while the intensified sound of scratching floods the auditorium, we might be trapped inside a psychological horror movie. Yet perhaps there is more to this technique than pure atmosphere. In addition to the live film being recorded and projected throughout, bookending the production are two pre-recorded film segments, self-consciously styled as home videos. This juxtaposition makes more visible the concern with representation that persists throughout, implicitly asking how we perceive ourselves and how we choose to present ourselves to others, particularly in the context of a mediatised modern culture. Is this not, like Gilman’s original narrator and perhaps even Gilman herself, a woman struggling with how she is seen in the world?

The question of gender, however, is oddly muted, as is the feminist genealogy that has wrapped itself around Gilman’s text. As a non-German speaker with no access to the script, it’s impossible to muse on any insights that Turner’s textual reworking might offer, but the half-informed eye – when not darting between the multiple facets of Mitchell’s intriguing staging – catches a sense of something missing. Beneath the technical accomplishment and the queasy shiver of unease, there is the nagging suspicion of a certain hollowness. Disturbingly, devastatingly acute as the psychological portrait might be, its significance remains elusive.

If global warming persists at its current rate and sea levels continue to rise, half of London might be underwater. There are maps available online outlining the potential damage; just type in your postcode and watch your neighbourhood disappear beneath the deluge.

This is just one of the grim facts alluded to throughout Platform’s operatic audio tourAnd While London Burns, created in 2006 in response to climate change and the complex, ubiquitous oil network that dominates the world’s financial markets. Earlier this week I belatedly traced this tour through the heart of the City, its skyscrapers appropriately garbed in an ominous cloak of fog that was distantly pierced by the Shard, that oddly apocalyptic splinter of steel and glass. Gazing up at buildings that had inexorably sprouted in the six years since the tour’s creation, it was hard to imagine a halt to the onward march of disaster that flooded through my earphones.

But the aim of And While London Burns is not despair. Its end point, or at least the end point that I’m told it would have reached if the audio file hadn’t hit a glitch as I stood awkwardly fiddling with my phone in the drizzle outside Lloyds, is one of action, of hope. Intersecting bleak facts with a deeply human impetus for change, the piece is delicately crafted for maximum emotional impact, making the reality of climate change powerfully felt without ever entirely eradicating an optimistic chink of light. We can still do something.

This immediately brought to mind the contrast with Ten Billion, a piece of theatre that I did not personally see but that was the subject of much conversation around the time it was showing at the Royal Court earlier this year. In essence a lecture given by scientist Stephen Emmott and placed on stage by Katie Mitchell, it was by all accounts an unflinching breakdown of how humanity, as a species, is fucked. In this vision of a future ravaged by environmental catastrophe and over-population, there is nothing to be done.

Although I’m not in any position to make judgements on the respective science behind these two pieces, they do throw up an interesting theatrical tension. Both pieces are, presumably, setting out with the intention of changing our outlook on the world in some way; And While London Burns is explicit about this aim, while it’s difficult to even read about the subject matter of Ten Billion without taking a rather blacker view of the future. The problem and source of tension, however, is the effect of this intended shift in outlook. Stepping out into Sloane Square or between the glass-fronted structures of the City, what do audiences take with them?

In the second of Chris Goode & Company’s Thompson’s Live podcasts, Artsadmin’s Judith Knight mused on just this problem. Is it better, she wondered, for theatre like Ten Billion to leave its audience with hope, however false, than to depart with incapacitating doom? The problem with being told you can do nothing is that it gives you licence to do just that. As Andrew Haydon put it in his review, there’s something “powerful and seductive” – even liberating – about the sheer nihilism of it all. No need to worry about changing our behaviour if it won’t make any difference.

And While London Burns might look our catastrophic future just as squarely in the face, but it also offers the possibility of action. Not only does it retain the promise of a small shred of hope, the very form of this piece of theatre makes it imperative for us to act in order for the piece to work. We are actors, in both the performative and real world senses of the word, made to navigate our way around the busy streets. In principle this necessity of small actions offers us belief in the fact that action on a larger scale is achievable, though in practice the difficulties of winding between human traffic and keeping in step with the audio instructions can be just as much of a obstruction to the piece as the physical obstacles that have sprung up since it was made.

While considering these questions of hope and action, another unlikely comparison presented itself. I was temporarily transported back to Battersea Arts Centre, where I spent Saturday afternoon gleefully exploring the building’s many nooks and crannies as part of interactive children’s show The Good Neighbour, a celebration of imagination, silliness and the capacity of humans to work together. An altogether different proposition, then, to either Ten Billion or And While London Burns.

Yet within the fun and games there is something distilled in this otherwise joyously silly piece of theatre that many more serious shows might take note of. In framing its frolics as an adventure, The Good Neighbour returns to its young participants, already so restricted in so many areas of life, the idea that the possibility of instigating action might lie within their power. Through the underestimated medium of play, it holds up an optimistic vision of human nature in which change is attainable as well as desirable. Unlike the distracting confusion of negotiating the suit-clogged alleyways of the City, a level of performativity that may be active but is more often than not frustrating, the gameplay here produces a sense of triumph and exhilaration.

Whether this exhilaration could be transposed onto a form of activist theatre is another question, and whether this would ultimately make a difference is an even bigger question. The extent to which theatre can inspire genuine political and social change is a well-traversed and still inconclusive debate. But if performance is to provoke action, surely the possibility of agency within the space in which it sets out its arguments is the first building block in the bridge to action beyond that space. To act, we must first believe that we are capable of action.