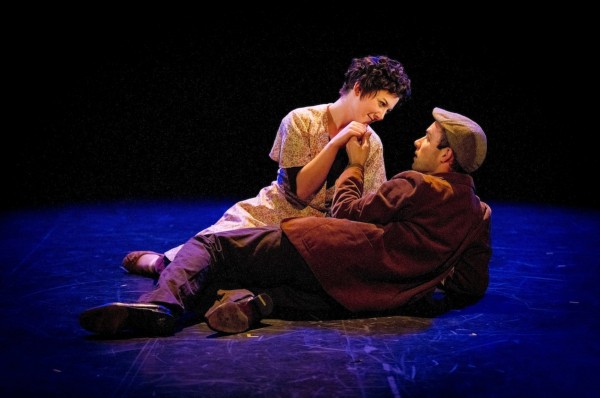 “Bereavement is a lonely process,” says Theatre ad Infinitum’s co-artistic director George Mann. It is a simple statement and perhaps an obvious one, but a painful truth nonetheless. This bruising observation is at the heart of Theatre ad Infinitum’s latest show, Translunar Paradise, a delicate journey through grieving and letting go that is embarking on an international tour following outings at the Edinburgh Fringe and the London International Mime Festival.

The Lecoq-trained Theatre ad Infinitum have forged an increasingly distinctive path for themselves in physical theatre and mime since their conception in 2007, with work that resists neat pigeon-holing. The company have experimented with an a capella score inThe Big Smoke, physical solo storytelling in Odyssey and spirited clowning in Behind the Mirror. Translunar Paradise is similarly, refreshingly unwieldy, marrying mime, masks, puppetry and music in a wordless love letter to the relationship between one couple and that relationship’s poignant termination through the intervention of mortality.

“You need a constraint when you create,” is Mann’s artistic mantra. He explains to me over the phone that during the long development process for Translunar Paradise, the first seed of an idea for which was born from the W. B. Yeats poem The Tower that lends the piece its title, he found it unhelpful to think of the story in literal terms. While the basis for the show was the simple premise of an elderly man losing his wife and learning to let go, it was clear from an early stage that this was not going to be a traditional, straightforward portrayal of loss. “I was looking for something that was going to force me to think creatively and do something exciting,” Mann goes on.

This was eventually found in the form of puppetry and masks, both of which have had a heavy influence on the finished piece, but Mann’s approach to these elements has directly clashed with the principles ingrained by his own training. Holding a mask up to the face and, in a similar way, exposing the join between puppet and puppeteer both contradict the aim of illusion, flagging up the artificial. These distancing techniques sat uneasily with Mann’s creative background, but he identified something “poetic” about that distance between puppet or mask and performer, as well as a way of “time-travelling” between old age and youth. By holding up masks to their faces, Mann and his co-performer Deborah Pugh can instantly inhabit their characters’ present, elderly selves, whipping them away to jump into flashbacks.

Mann’s careful, considered description of the creative process behind Translunar Paradise, which he conceived, devised, directed and performs in, conjures an image of a theatrical scrapbook, borrowing fragments from various other art forms and pasting these together into something identifiably his. Another, surprising source of inspiration was Art Spiegelman’s graphic novel Maus and the way in which Spiegelman’s black and white sketches movingly evoke the past. “We started working in a comic book, photographic way,” Mann expands. “We picked out the actions that we wanted to use and started creating the back story of this couple and their life together scene by scene as if we were flicking through photographs.”

Was it always intended that this story would be told without words? Mann tells me that the decision to incorporate masks effectively precluded the possibility of speech in his mind, but there was also a deeper reason for this artistic choice; quite simply, “this is something that is really hard to describe”. Death remains one of the last taboos, and particularly in our culture loss and grief are not topics that are openly discussed. More than this, grieving is an experience that is in many senses divorced from verbal communication. As Mann continues, “it’s a lot about what you feel and experience and remember. I wanted to communicate an experience and I wanted emotion to be part of that experience. I felt that words couldn’t say it as strongly in this case.”

In the absence of words, music has taken on an integral role within the performance. More than simply a soundtrack, Mann and his creative team discovered that the music could function almost as a third character. “It interferes, it stops things, it punctuates moments,” he says. “It made the piece so much richer and the music became the soul of the piece, the heartbeat behind everything.” Much like the rest of the process, however, this musical integration was not something that came easily and was the result of much trial and error. One of the most important decisions to be made was what instrument to use; the eventual choice of accordion has clear resonances. “I wanted an instrument that breathes,” Mann explains. “Breathing is such a big part of emotion and it’s such a big part of life that we sometimes forget.”

Grief affects everyone, lending this piece the universality that has so moved its audiences, but it has particular significance for Mann. While ideas were still taking shape, Mann was forced to deal with the illness and death of his own father, a personal experience of loss that has informed the piece in many ways. Mann is extraordinarily open about the impact of this experience upon Translunar Paradise: “I was with my father when he died and that was very quick, very simple and very beautiful, and it made me realise that was what the piece needed as well.” He admits that creating the death scene, however, was challenging. “I didn’t know how to do that moment and I was scared of not knowing,” he shares. “And then it just came to me very quickly and I realised it wasn’t as complicated as I had thought. It’s actually extremely, painfully, beautifully simple.”

Speaking about his process, which is clearly a painstaking one, Mann expresses irritation at the public perception of devised theatre as being “random” or unconsidered. “For us it really isn’t,” he protests with feeling. “It’s such precise work; it takes a long time and a lot of thought.” Despite Mann’s involvement in all areas of the show, it emerges that this piece is in fact the product of extensive collaboration. The company’s other two co-artistic directors have regularly provided feedback along the way and the production has been honed through various scratch performances, at which Mann was surprised and encouraged by the honesty of their audiences. He admits with genuine frankness, “I really needed that outside perspective and I wasn’t going to pretend for a minute that I could do everything by myself.”

Translunar Paradise’s protracted, precise development appears to be paying off, with early performances spawning a full international tour that will be stopping off in Athens, Jerusalem and Sao Paolo, as well as making trips to various festivals around the UK this summer. Taking the show to new audiences is a prospect that excites Mann: “Because I trained at an international theatre school, I’m very aware that there exists a world beyond British theatre and I wanted to be able to share my work with as many people as possible.” Thanks to its lack of words, the play would seem to naturally lend itself to international audiences, but Mann was still concerned that the gestures and references might be too British – “a big part of the piece is set around drinking and making tea,” he laughs. The emotion of the piece, however, translates all too easily.

It is evident from speaking to him that the gradual process of teasing Translunar Paradiseinto life has been an intensely personal journey for Mann, and he hopes that this journey will be reflected by the experience of audience members. “The audience are connected to the piece through their own loss and that’s what I want people to feel,” he explains as our conversation draws to a close. Mann also hopes that the show he has created, despite grappling with death and grief, will depart with an uplifting sensation of relief. “Life goes on,” he says simply. “Every ending is a beginning.”