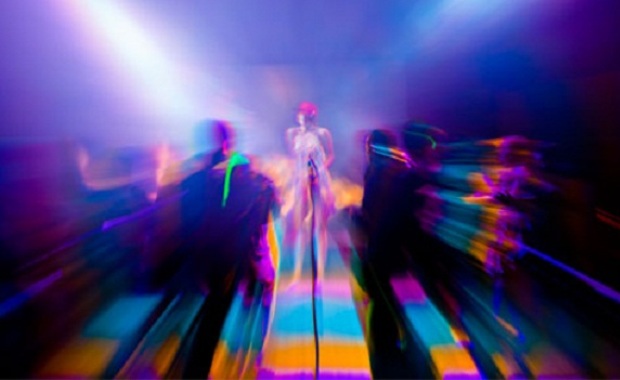 If nostalgia is a disease, then poet and rapper Kate Tempest’s explosive debut play is a startling reminder of just how sick we all are. This bitterly funny snapshot of modern life takes as its subject a lost young generation already busy reliving a past when they used to feel something, haunted by untouched dreams and paralysed by indecision. As one character puts it, “we spend life retelling life”.

Ennui plagued twenty-somethings Ted, Danny and Charlotte are marking the tenth anniversary of the death of their friend Tony, to whom they each confess their fears, frustrations and limitations in a series of lyrical monologues. Everyman Ted, played with a groan of recognition by Cary Crankson, is trapped in a tedious, nausea-inducing office job and a comfortable but unexciting relationship. His best friend Danny, a swaggering yet emotionally delicate Ashley George, is his arty antithesis, the eternal dreamer lazily intent on being a rockstar and winning back Lizzy Watts’ frustrated teacher Charlotte. Each is like a fragment of an old friend, the familiar melded with the idiosyncratic.

Much is familiar in Tempest’s evocative ode to modern London, a concrete playground where the routine is as grey as the pavement and streetlamps blink down instead of stars. In the richly textured, quick-fire speech, shot through with distinctive rap-inflected rhythms, the poetic is often found in the pedestrian. The profound and the mundane are never more than a hair’s width apart, as the three characters question over the course of 24 hours whether happiness lies in chasing youthful dreams or in dull yet companionable trips to Ikea. There is a refreshing honesty to Tempest’s earthy writing, which intelligently recognises the penetrating human truths that can be found in ordinary experience. The resulting vision of life’s inevitable disappointments, sharply funny as it often is, hits close and hard.

Tempest’s persuasive collision of realism and spoken word gig is given punchily paced direction by James Grieve, who with the excellent performers has tapped into a rhythm that rarely falters. Transporting us to the clubs where Londoners drink to escape, Cai Dyfan’s simple yet striking design is all speakers and boom boxes, redolent of the constant noise that plays over empty lives and that pulses powerfully through the Roundhouse courtesy of Kwake Bass’ soundtrack. In another clever touch, close-up film projections of the actors’ blank expressions accompany their fevered monologues, a reminder of the repetitive boredom that they are desperate to break out of.

While this lean, muscular creation could do with some fleshing out, Tempest’s first foray into theatre is an undoubtedly impressive one. Her words paint a vivid, pulsing mural of a city writhing with its own restlessness and discontent, yet straitjacketed by a numbing sense of inertia. Her broken characters, hands wrapped protectively round microphones, warn us upfront that there will be no incredible truth, no deeper meaning in what they are about to relate. Instead the truth they reveal is all too credible.