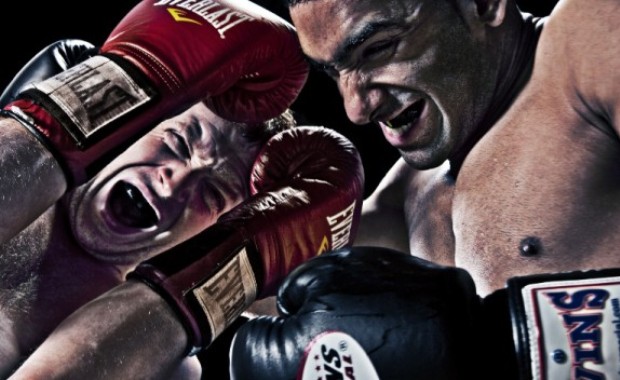 Three minutes. No more, no less. That’s the precise length of a round in professional boxing, a unit of time into which matches, training and Bryony Lavery’s punchy scenes are divided. It’s just enough time to dodge, feint and land the knockout blow. Shifting constantly from foot to foot, Lavery’s play explores the individual impact of a sport dominated by the swinging of the fist and the flash of the camera, an inherently performative spectacle that she reveals to be as much about control and discipline as it is about unbridled aggression.

This study of boxing takes as it object a small gym in Glasgow, where five would-be fighters, each with their own reasons to hit out, see the sport as a way out of the city and circumstances of their birth. Backed by a flickering bank of screens, these hungry, sparring youngsters are continually haunted by the future spectre of fame, their face on a television and their fists clenched around wads of cash. Laura Hopkins’ design places the performers on a raised platform that immediately recalls the boxing ring and that simultaneously holds them up for inspection, lifting them from the ground but not quite raising them up to the bright lights.

For a sport that bears striking if unlikely resemblances to dance – the uniting and separation of bodies, the swift lightness on the feet – Frantic Assembly’s treatment is a fitting and energetic one. Though sometimes lacking in verbal eloquence, through the language of movement the finely tuned bodies of the characters speak, a physical form of communication that is as central to the piece as the words of Lavery’s script. It is by way of this speech that these individuals come to define themselves; as the observing mother of one of the young boxers remarks, “it’s like there’s a smile in their bodies”. This physical language also carries into the use of Underworld’s music, a pulsing soundtrack that echoes both pounding heartbeat and the pounding ofpunches.

Rapid and pounding too is Lavery’s structure of short scenes and monologues, shifting restlessly from one to the next. While this approach keeps the audience on their toes as much as the tireless performers, the swift onwards movement can prevent the punches from being felt before the bell rings in the next round. The blows land, but they don’t always bruise. Any shortfall in the depth of the scenes, however, is compensated for with the sheer force of the performance, more than conjuring the sweat and determination of the ring.

Beneath this thrilling, muscular production there is a barely visible glint of rage at the injustice of a society in which one’s fists might be the only passport out of a dead end life – a rage smothered, like that of the protagonists, in precision and control. Despite the controversy that surrounds professional boxing, Beautiful Burnout embraces both its danger and its ecstasy, acknowledging how fighting can be an escape and a salvation as much as it has the power to destruct. Boxing is a dangerous sport, but so is life.