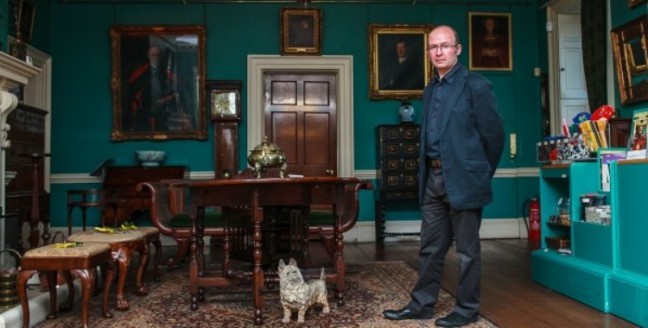 The title of Peter Reder’s latest guided tour is deliberately misleading. It suggests a series of objects, an inventory, a forensic dissection of Preston Manor through the stuff it has accumulated – art as archaeology. But rather than offering the act of excavation that so appeals to an audience, Reder denies our investigative urges at every turn. Despite appearances, this is no perfectly preserved historical document; it’s an exhibition gallery, manipulated at the mercy of its curators. The building is, as Reder puts it, a “giant dolls’ house”, as much a canvas for the imagination as the delicate structures that house our childhood dreams.

Both imagination and curation are key to what Reder has carefully choreographed through the rooms of this fairly ordinary historical home. Preston Manor is, as Reder himself admits, nothing particularly special. The former home of the Stanfords, a not especially important branch of the landed gentry, it has no real claim to fame, nothing to recommend it to the nation’s memory. As Reder spikily quips, the mysterious case of Kitty – the Manor’s disappearing feline inhabitant – is the biggest thing ever to have happened here. Pride of place in the dining room is a rejection letter from the Merchant Ivory production company – a celebration of a non-happening.

In the place of eminent individuals or memorable events, Reder fills this space with memories and ghosts. The piece’s investigation of place always returns to an investigation of people – both the elusive former owners of the house and the staff who now animate it. Beneath Reder’s gentle, unassuming presence as a performer, guiding us through the building with all the mild enthusiasm of the TV historian, there is a glimmer of archness and a hyper-sensitivity to the form he has appropriated. The latent desire to spin stories from the tattered vestiges of personal history is indulged in, acknowledged and then upturned, as our guide tells us the sensational, speculative stories we want to hear before smashing them apart.

Populating the building with a subtle political undercurrent, Reder quietly exposes the glossy, alluring lifestyle of the late Stanford family to be something of a tourist sham. The modern lust for Downton Abbey style escapism is frustrated by fractured narratives and messily stitched seams. Gilt-edged mirrors and luxurious carpets are succeeded by corridors crowded with the prosaic clutter of a working museum; a projected video sequence of two staff members enacting a typical servants’ hall scene continues rolling as they slip, giggling, back out of character. Eschewing the fetishisation of the aristocracy that first made this place into an attraction, Reder’s fascination is clearly with the “ordinary” individuals who now work there and who provide the life of the house far more than the austere portraits on its walls.

For all my insistence that this is not really a show about objects, Reder’s extensive research has uncovered some curious and extraordinary items. In the private library of one former occupant, a grinningly unearthed French copy of the Karma Sutra asks inevitable questions about what happened behind closed bedroom doors, while one of the novels on display in the family’s drawing room is the astonishingly titled The Mating of Anthea, an unlikely marriage of romance and eugenics. In an anomaly of a room just off the main hall, the antique collection of a nineteenth century theatre designer – all oppressive wood panelling and gleaming silver – has been oddly transplanted into a house that otherwise pretends at authenticity.

In one of the final rooms we visit, Reder draws our attention to a huge bookcase lined with grotesque, grimacing porcelain statues. Apparently this was the personal collection of Lady Ellen Stanford, who we might conclude to be a woman of questionable taste. What is important, however, is not the collection itself, but the impulse to collect. Why, in bizarre magpie fashion, do we gather objects? How do we decide what is of value and what should be discarded? How do we organise the things we accumulate?

These questions are equally applicable to Reder’s show, which is a product of curation if ever there was one. Confronted with such a wealth of material, we can only ever be shown a fragment, but here the process of selection that always colours our reception of history is brought firmly into the foreground. The piece implicitly asks, by its pointed selection of certain material, what narrative it is consciously constructing from these few chosen items. As I linger that moment longer in each room, peering into the shadows, one question insistently remains: what are we not being shown?