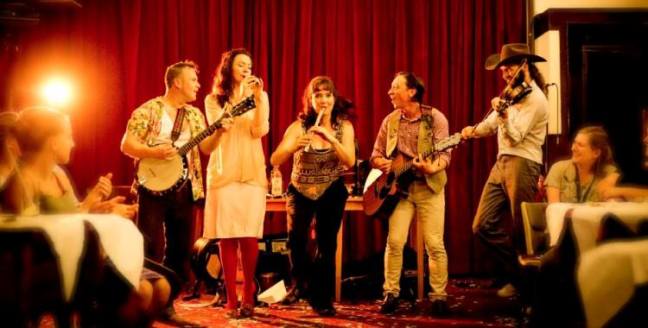 However you do it, there’s something a bit odd about thrusting yourself headfirst into imaginary winter in the midst of sweltering summer heat. As pipe-playing actors stubbornly tell us it is December 2010 while sweat trickles slowly down their foreheads, the prelude to the National Theatre of Scotland’s The Strange Undoing of Prudencia Hart has something of the school play about it; well meaning, big hearted and determinedly blind to its own obstacles – but it’s not fooling anyone. Fans continue to whirr valiantly away, while theatregoers gulp down drinks with a fervour not usually witnessed outside the Edinburgh Fringe.

Then something sort of magical happens. As the actors begin their story, we’re instructed to throw handfuls of improvised paper ‘snow’ into the air, settling on heads and tables and floor. Melody Grove (dressed in so many layers I’m impressed she makes it through the show without fainting) sits atop another performer’s shoulders as a mimed steering wheel, a gleefully waving windscreen wiper, and a tax disc, rearview mirror and two torches held aloft instantly conjure a car. It’s the simplest kind of theatrical illusion, but the rough and raucous spirit in which it’s done brilliantly sets the tone for the show that follows. The heat doesn’t abate, and we’re not quite transported to the snow-blanketed landscape of the Scottish borders, but all of a sudden our sweaty environs seem to matter a little less.

This effervescent little firework of a show is the joint creation of playwright David Greig and director Wils Wilson, joyously embracing both the traditional ballad form and the rowdy pub setting – in this instance, the intimate (and uncomfortably muggy) Welsh Centre bar. Greig’s text takes the form of a ballad about ballads, encompassing everything from lively folk sessions to dry academia, but its knowing self-referentiality never sacrifices a vital sense of fun. At the heart of the piece, effortlessly marrying form and content, is a tension between the purity of tradition and the inclusiveness of a form that morphs to appropriate new cultural phenomena – two camps into which Greig’s bickering gaggle of academics are firmly divided.

One of these academics is the eponymous Prudencia Hart, a prim and reserved traditionalist specialising in the topography of hell, for whom fashionable attempts to intellectualise Facebook statuses and football chants are little short of blasphemy. The story begins at a midwinter conference in Kelso, a small Scottish border town, where Pru’s purism is decidedly in the minority, up against post-post-structuralism and theses on Lady Gaga. Tradition is out of vogue. Adding inconvenience to humiliation, Pru then finds herself stranded with her colleagues in a snow-surrounded pub, trapped somewhere between the drunken locals and the horror of the karaoke machine.

Rattling through academic papers and beer-drenched revelry with equal ease, the first half of the show is mostly hilarious scene-setting, affectionately poking fun at its characters and drawing its audience into the circle of the story. This is narrative at its simplest and most familiar: a yarn down the pub. We are made to feel that the story belongs to everyone, as the narrative is shared and passed between the five performers, who in turn pass through the audience. Actors dance on tables and leap up onto the bar, while several audience members find themselves roped in as props or extras (fellow critic Dan Hutton, incidentally, makes an excellent motorbike). Greig and Wilson find a popular form, populate it and turn it inside out.

The action only begins to drag in an extended sequence featuring four drunken locals, who might be realistically hammered but add little to the gathering story; it’s the one point at which the production feels indulgently overlong. It’s not surprising, then, that Prudencia wants to get away, escaping the drink and drug-fuelled hedonism of the pub for the snow-covered town and a suspiciously friendly B&B owner. Nick, it turns out, collects rare books – and souls. As Prudencia’s academic subject swiftly becomes her reality, it soon transpires that she is the devil’s latest prize, condemned to eternity in a tartan-filled bungalow next to the Asda car park.

Pru’s subsequent ‘undoing’ in the second half offers both a transformational narrative of self-discovery and a movement towards reconciling the two sides of the argument established by Greig in the first part. As the verse that has propelled the story thus far is abandoned in favour of prose, Prudencia learns over several millennia that a life without passion and poetry – no matter how many books you surround yourself with – is no life at all. This section of the show, settling into a quiet rhythm after the raucous first half, is certainly strange. But it’s also sort of beautiful. In one gorgeous, startling sequence, the devil (played by both Paul McCole and David McKay in a slick and surprisingly effective bit of shape-shifting) finally surrenders to poetry, melting together with his captive in a slow and intimate dance.

This section also provides an opportunity for the excellent Grove to become a captivating central anchor for the piece, as her Prudencia gradually reveals an unknown, passionate facet of her otherwise reserved character. Her undoing refers less to a tumble into sin than an unstitching of her distant, sedate exterior. This is paired with Pru’s visual disrobing, as her meticulously neat layers are discarded one by one, leaving her in just slip and tights, while her hair cascades down from its prim bun. Transformation runs through the form, too, as prose gives way to a torrent of poetry and the explosive power of a collective football chant unites the ballad with its modern cousins. There’s even a bit of Kylie thrown in for good measure.

Alongside the production itself, it feels worth pausing to consider its context. Prudencia’s specialist subject might be the topography of hell, but the specifics of this production concern far more earthly locations. Like many of Vicky Featherstone’s early moves as the new artistic director of the Royal Court, this programming has the feel of a statement, and a multi-layered statement at that. Firstly, it’s a bridge of sorts between Featherstone’s role with the National Theatre of Scotland – for whom she commissioned this piece – and her new home at the Royal Court. Secondly, the fact that this show from a theatre without walls is being presented outside the brick and mortar of the Court, as part of its Theatre Local season, suggests a continuation of that gesture of opening up that has so far characterised Featherstone’s tenure. More and more I think that only an artistic director with the experience of not being shackled to a building could give as much thought to what a building really means as Featherstone has already.

Then of course there’s the fact that this show from the National Theatre of Scotland, engaging with Scottish folklore, is being presented at the Welsh Centre in London, England (all that’s missing is a slice of Northern Ireland). And it’s a show about border ballads, in which the narrative itself floats, flitting from performer to performer and only briefly settling. At a time when British identity is increasingly under pressure, this implicit stretching and questioning of nationality feels significant, inviting us to reconsider our connection with our country and our past. It’s also fascinating to see this ahead of Northern Stage’s Bloody Great Border Ballad Project at St Stephen’s in Edinburgh, offering another modern, border-crossing take on this form.

The pub setting, too, is vital to the rowdy sense of community that emerges in the room by the end of the night. As already mentioned, the forms that Greig and Wilson are recruiting to tell this story are very much popular forms, from ballads to folk music to karaoke. There is the sense that, wound together in this way and planted in a familiar social setting (ideally oiled with a few drinks), this marriage of popular forms both old and new offers a new and yet old way to share our stories with a group of people gathered together in a room, breaking through many of the stifling conventions that often hamper theatre. The Strange Undoing of Prudencia Hart is, like the tale round the campfire or the roaring anecdote told over pints at the pub, a basic but accomplished lesson in storytelling. And it’s devilishly infectious fun.

One thought on “The Strange Undoing of Prudencia Hart, Royal Court Theatre Local”