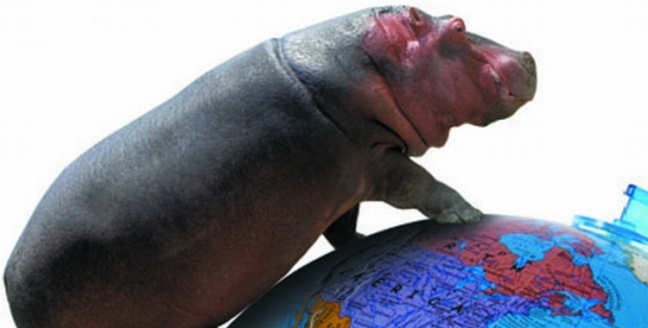 It’s a bit of a bold statement, but I think Chris Goode’s Hippo World Guest Book might just be the best piece of theatre to be made about the internet to date. Except, strictly speaking, it’s not actually about the internet at all – at least, not in any straightforward sense. As Goode tells us at the beginning of the show, none of the words in the main body of the piece are his; apart from the pre-recorded introduction, he has not written any of what is about to be performed. Instead of sitting down at a blank word document and trying to tackle the unruly behemoth that is our online world, Goode has borrowed from it. He doesn’t comment on the internet as much as comment from it.

The vast majority of the text in the show comes from the eponymous Hippo World Guest Book, which is exactly what it sounds like: an online guest book on a website for (surprisingly vociferous) hippo fans. Left unmoderated, this web page is a fascinating microcosm of online commenting culture, beginning in a spirit of giddy optimism but quickly beginning to sour. Goode has edited down hundreds of pages worth of comments into a one hour slice of highlights, though he’s clear that each individual comment has not been meddled with in any way. What we hear is exactly how the commenters wanted to express themselves – a thought that is, as Goode points out, quite extraordinary to reflect on at certain points.

In his little preamble – the introduction to the introduction, if you will – Goode tells us that he stumbled across Hippo World and its oddly compelling guest book by accident, but the subject of the comments he goes on to read feels significant. Or rather, it is significant because of its insignificance. I can think of few things more innocuous than a fan site for, on the face of it, a pretty uncontroversial animal. Because of this innocuousness, the subsequent bile of the trolls who begin to occupy the site is all the more startling, while the lack of any meaningful connection to politics or world events makes it a strikingly pure metaphor for internet behaviour. Where Theatre State’s choice of forum topic (arts funding) in A Lesson on the Benefits of Being a Troll felt a little manipulative, the benign indifference that I suspect most audiences feel towards hippos functions to focus attention on the intent of the comments rather than their specific content (I may be wrong here; my fellow audience members might have had extremely strong opinions about hippos).

The arrangement of the space and Goode’s performance within it also feel important. There’s a very low-fi aesthetic to the piece – so low-fi, in fact, that it would be easy not to think of it as an aesthetic at all, just to accept it as a man reading from a stand. To the side of where Goode reads from the guest book, there is a small table arrayed with a hippo stuffed toy, a candle and a framed photo of Hippo World’s founder. These are all produced, along with the guest book (actual printed pages slotted into a plastic file), from a pretty unassuming Morrisons bag. The candle is lit at the start of the performance, as the recorded, storybook style introduction outlines the utopian beginnings of Hippo World, and remains gently flickering away until the guest book finally becomes a neglected wasteland of casino spam.

There’s something deeply melancholy about this journey from optimism to antagonism to a void occupied only by advertising. It is, of course, a metaphor for the web – and a particularly powerful one in the midst of renewed concerns about Twitter abuse – but it also feels like something of a sad allegory for all of our utopian endeavours. This sense of melancholy is underlined throughout by Goode’s extraordinary performance; even as it is properly laugh-out-loud, tears-streaming-down-the-face funny (and it is very, very funny), there is a subtle underlying layer of sadness, a heavy knowledge of what is to come. Goode takes on the sighing character of a god watching his creations rip one another to shreds, as if he knew all along that it could only end this way. But then there is also such gentle care in the presentation of passion and hope – even if it comes in the form of “I LOVE HIPPOS!!” – hinting that perhaps things could be different, perhaps there is something in the attempt to carve a space for shared enthusiasm and love.

As Matt Trueman reflected in a great piece for the Guardian a while back, exploring the internet in the space of the theatre is extraordinarily difficult, and any show that attempts to do so runs the risk of appearing dated almost as soon as it appears. Online developments simply move too fast, so therefore anything that attempts to be technologically innovative and of the moment is almost bound to fail. Instead, what Hippo World Guest Book does so brilliantly is to acknowledge the mechanics of theatre as much as the mechanics of the internet. Rather than attempting to evoke the sleek, digital anonymity of the internet, Goode makes a point of the analogue intimacy of his surroundings. Attention is deliberately drawn to the simplicity of the props, the physical presence of the pieces of paper from which Goode reads, the co-presence of performer and audience members in the same room.

I would suggest that all the best pieces of theatre about (or touching on) the internet – those that really capture something of its spirit, its complexity, its effects on human thought and behaviour – are those that recycle its habits with a simultaneous awareness of the context of the theatre. I’m thinking of the multiple-tab structure of Narrative; the short, sharp bites of theatrical data in Love and Information; the riotous clash of diet tips, “likes” and cat videos in Vivienne Franzmann’s bonkers piece for Open Court’s Collaboration project. Because while perhaps theatre is ill-equipped to deal with the technological intricacies of the networked society, it is perfectly positioned to explore the predicament of individuals and communities within it.

By way of a postscript, I have to say that I’m intrigued (if not also a little horrified) by the idea of a durational performance reading out every single one of Hippo World’s comments …