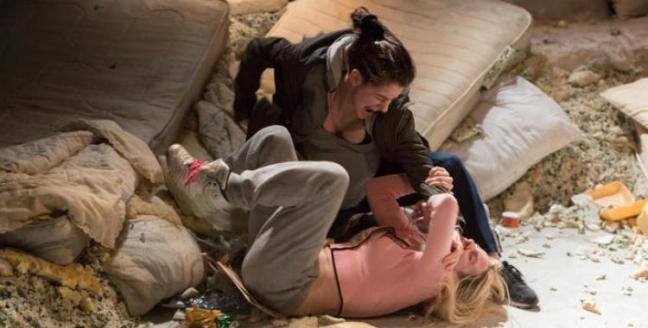 There is something a little uncomfortable about watching Pests. While playwright Vivienne Franzmann, who wrote the play as a product of her residency with Clean Break and her visits to women’s prisons, insists that it is not voyeuristic, it is hard not to feel a little queasy about the experience of watching two damaged, vulnerable individuals sink further and further into poverty and addiction. The roles of victim and observer are difficult to shake off, even if we as audience members are made to feel increasingly complicit.

The two individuals in question are sisters Pink and Rolly; both in and out of prison, both struggling with heroin addictions. At the play’s opening, it is Rolly who has just finished doing her time, returning home to Pink heavily pregnant but puffed with hope. The tidal pull of her old life, however, is hard to resist. Rolly might want to move away and get a job, but Pink has other ideas, and their familial bonds are tough to sever. Possibilities slowly ebb away as the sisters’ “nest” closes in around them and their mutually dependent relationship becomes ever more toxic. Abuse, meanwhile, lurks around the edges of the play, never far from sight. It’s almost unremittingly bleak stuff, yet brutally compelling with it.

All of this said, the play’s harsher edges are tempered by humanity and – surprisingly – humour. The volatile central relationship is one built on fantasies, affectionately traded insults (“you lazy flea-infested skank”) and a shared past that knits them inextricably together. The sisters also share a unique slang-based language that Franzmann has invented, which combines childlike utterances, playful flourishes and hard urban edges. In performance, it’s initially disorientating but easily picked up, quickly enveloping us in Pink and Rolly’s world. There is the sense that this language protects them somehow, offering a retreat back into childhood while simultaneously acting as a kind of armour. It can be fierce one moment (“totalicious cuntface”) and tender the next (“I is blue wiv sorrows that I ain’t a better girl for you”). Some coinings, like “gnaw” for heroin, bring with them a startlingly apt series of associations.

The relationship between the two sisters is made all the more compelling by the electric performances of Sinead Matthews and Ellie Kendrick. As Pink, Matthews is all vulnerability and jagged edges, parading her toughness while she breaks inside. The mental illness that she wrestles with is delicately handled; Kim Beveridge’s video projections hint at a world only Pink can see, while Matthews’ frantic raking of her hair suggests a woman scrabbling to hold her thoughts together. Kendrick’s Rolly is gentler and quieter, with moments of girlish charm and wonder, yet she has a hardness about her that is resolute where Pink’s is brittle.

One of the triumphs of the production is Joanna Scotcher’s set design, which carries the heavy burden of realising Pink and Rolly’s whole world. Their “nest”, a striking mound of stained mattresses, is poised between naturalism and fantasy, at once displaying very real signs of squalor and nodding to childhood dens and dreams. Despite using decidedly ordinary objects, their combination creates an appropriately surreal sort of space that is both playground and prison for the two women. Surrounding the room is a skeletal framework, full of gaps, suggesting an open but imprisoning cage. The physical bars may have gone, but others still remain.

And if Pink and Rolly are in a cage, that leaves us on the outside looking in. After a while grappling with this perspective, how it made me feel, and its ethical complications, it feels no less knotty. But it’s worth briefly pausing over Franzmann’s title. The single word, Pests, implies the way in which society (particularly a society in which those disadvantaged by the system are cruelly pitted against one another) might see these women. Pests, vermin, drains on the state. But these characters are just women; strong, funny, vulnerable women; women who have been let down at every turn, not least by the prison system. If Clean Break can make more people see that, then maybe the queasiness is justified.