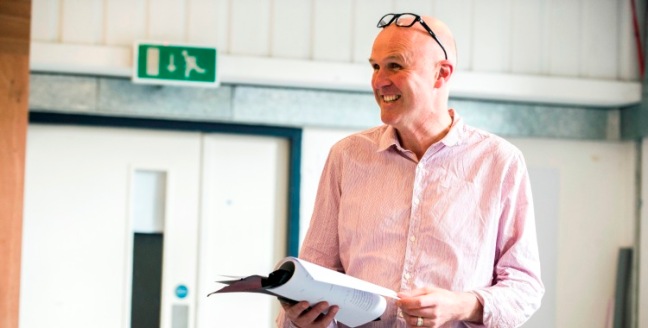 There is something satisfyingly cyclical about Tim Crouch’s work. The theatre-maker’s first play, My Arm, explored ideas about representation and realism through the unlikely story of a boy who raises his arm above his head and refuses to take it down. Throughout the course of the play, this pointless act becomes a source of global fascination, captivating the contemporary art scene.

Now Crouch’s new play for the Royal Court, Adler & Gibb, uses a narrative about Hollywood movie-making to return to similar preoccupations. In it, an actress preparing to play a famed conceptual artist goes to terrifying lengths to achieve authenticity in her portrayal, asking implicit questions about art, acting and appropriation. It is, Crouch suggests, “a very much bigger and more complex version of My Arm”.

Reflecting on the shows he has made over the last ten years, Crouch describes My Arm as the “mothership” of everything that followed. The play emerged as a result of the frustrations that Crouch had felt over several years as a jobbing actor – frustrations both with the mechanisms of the industry and with what he saw as accepted theatrical form. Writing My Arm in his late 30s was, he recalls, a “last ditch attempt” to rekindle his passion for performance.

After graduating from Bristol University, Crouch began his career as a member of a devising cooperative in the city, which was the start of what he describes as “the most extraordinarily intense and wonderful and fulfilling time”. Struggling to find other work in his late 20s, however, Crouch pursued formal training at Central School of Speech and Drama. It was, he feels, a decision that the industry forced him into.

“You would go for auditions or interviews with the traditional sector and everything you had done, no matter how brilliantly creative it was, didn’t seem to have any currency in those interviews,” he remembers. “I would say that’s still the same now. There is a very marked career path and certain jobs or certain venues or certain directors have more points than other jobs and venues and directors, and so it feels like the deal is you get as many points as you can by working in this place or that place.”

As well as resisting this rigid and competitive culture, My Arm kicked back against the dominant form of psychological realism that had informed Crouch’s training. The play is written as a first person monologue, narrating events from the perspective of the character who fatefully decides to thrust his arm into the air. When Crouch performed the piece, however, his arms remained firmly at his sides, immediately challenging straightforward representation.

“I was interested in a different kind of reality,” Crouch explains. The show was also “a provocation to an audience to get involved more”. At the outset, audience members were asked to contribute personal items to the staging of the play, making explicit the necessity of their presence “to complete the experience”.

But while plays like My Arm might act as vehicles for sometimes complex ideas about theatre and the world, Crouch insists that they are absolutely rooted in story. “If I wanted to just ask questions about theatre and representation, I would become an academic,” he says. “I want to make theatre and I think theatre’s strength is narrative, a shared narrative, the passing of narrative. And so all of the pieces that I’ve made have been first and foremost about the story.”

Crouch describes his second show An Oak Tree, for instance, as “a little dance between form and narrative”, but one in which the narrative itself was vital. This show’s central formal device was the use of a different actor every night to perform the two-hander opposite Crouch without any prior knowledge of the play. Unmoored from their usual reference points, this second performer would flounder in the same way that the character, a man whose daughter has been killed in a car accident, is undone by his grief.

“I would want there to be a dialogue between form and content,” Crouch elaborates, pausing to note with a laugh that he sounds like a professor. “But in a very fleshy, pragmatic way, that’s what it is,” he goes on. “There are formal devices in all my plays that are only there because they deepen the telling of the story.”

In ENGLAND, the transplanting of theatre into a gallery space acted as a metaphor for the heart transplant that is central to the play’s narrative, while The Author engaged with its site in an altogether more controversial way. Commissioned for the Upstairs space at the Royal Court, the play was entirely contained within its audience. Performers sat amongst theatregoers in two banks of seating facing one another, and the events they described took place in audience members’ minds rather than on the stage.

“In The Author we are the audience as well, so their temperature is our temperature,” says Crouch of performing the piece. It was a show that pushed audiences into uncomfortable territory, alluding to the Royal Court’s history of shock and violence during the “in-yer-face” period of the 1990s and questioning the ethics of representation. Its disturbing subject matter and exposing focus on the audience provoked a startling range of reactions.

“At times in that show the audience took us to a really difficult place,” Crouch admits. “I had a physical threat in that show; people swearing, shouting, walking out.” This splitting of opinion, however, was encouraging to Crouch – “I’m excited when people either hate it or love it” – and reaffirmed his interest in active engagement with an audience.

“The audience is absolutely fundamental to my thinking,” he says. “They provoke and they incubate the form – they hatch the form”. Crouch is also keen to stress that “immaculate attention” was paid to the audience’s experience during the making of The Author; it was never about provoking for provocation’s sake. “But what you can never do as a theatre-maker is second guess what an audience is bringing to the theatre,” he adds. “By and large I try to keep things open, so it’s all interpretable.”

So central were the audience to The Author that people even began to mistake the title of the show. “A lot of people go ‘I saw your play The Audience’, and I go OK, right,” Crouch laughs. “I really like it when people forget or confuse what it was called, because it could easily be called The Audience. I suppose one of the suggestions in that play is that the audience is the author.”

Although The Author went on to tour elsewhere, it was always set at the Royal Court, intimately responding to the site of its commission and creating a fascinating “slippage between the location and the theatre”, as Crouch puts it. Adler & Gibb, which brings Crouch back to the Court, is less specifically grounded in the theatre’s history and location. While it is “absolutely written for a theatre”, the show speaks to ideas that are common to all theatre spaces: performance, representation, the blurring of truth and fiction.

When I speak to Crouch at the Royal Court, he is nearing the end of the first week of rehearsals. During the morning I spend with them, the cast are playfully exploring the relationships between their characters and with the audience, prodding at realist conventions while grappling with the challenges that Crouch’s script presents. One of these challenges is the onstage presence of two eight-year-old children, who are not characters in the play but remain present throughout.

“I’m excited about their formlessness,” Crouch tries to explain the thinking behind this surprising choice. He adds, in resistance to the instrumentalising of art as a form of education, that “art should be about unknowing something rather than knowing something”. Unlike their adult counterparts, Crouch argues that children are happy with “unknowing” and do not need realistic representation as a spur to their imaginations; “a child doesn’t need to exert anything to transform something into something else”.

It is in Adler & Gibb that Crouch’s recurring interrogation of realism reaches its zenith. At the same time as questioning realist representation in theatre, the new play is deeply interested in the medium of film, which Crouch describes as “the high tide mark of realism”. Recalling Hollywood actors’ lauded transformations into real people – think Meryl Streep’s Margaret Thatcher or Jamie Foxx’s Ray Charles – Adler & Gibb examines the “strange exertions towards reality” that cinema encourages and celebrates.

“It’s a political idea for me,” says Crouch, “in terms of that idea of acquisition; acquiring reality, trying to buy or own reality. And realism to some degree being an attempt to fix something and to own something, which I have a question about.”

Crouch also has a question about the idea of individual genius that this tendency enshrines. Although it happens on a bigger scale in Hollywood – as depicted in Adler & Gibb – Crouch sees it infecting the theatre industry as well, pointing to the recent example of Birdland at the Royal Court and the central attraction of leading actor Andrew Scott.

Crouch goes on to suggest that “it’s like having a beautiful diamond on a rather dull canvas, and you just go ‘that’s an amazing diamond’, when actually the artist wants you to think about the whole canvas.” Instead, he says, individual theatre-makers “shouldn’t be thought of as geniuses, because it gets in the way of what the work is trying to do”.

For this reason, Crouch is keen to emphasise the close collaboration that has characterised his career as a theatre-maker. “I wouldn’t want anyone to come in going ‘I’m going to see a Tim Crouch show’,” he says. Although his name most frequently gets attached to the work, he is adamant that his shows are the product of collaborative processes, shaped by the input of the rest of the creative team.

“I’m lucky in that I have two very close allies and collaborators and sounding boards in Karl James and Andy Smith and that we have been talking about the work for a long time now,” Crouch tells me, referring to his co-directors. As an actor himself, with bitter experience of all the frustrations that can involve, he also takes care to welcome the thoughts of performers.

“Why would you ignore the presence of the people in their room and their intelligences?” Crouch asks, incredulous at creative processes that do not encourage collaboration in the rehearsal room. “I’m trying to some small degree to challenge some of the practices that I have problems with, or I had problems with when I was an actor,” he adds, returning once again to the impetus of his work. For Crouch, it is vital to stretch the conventions of the industry, encouraging ways of working that nurture creativity.