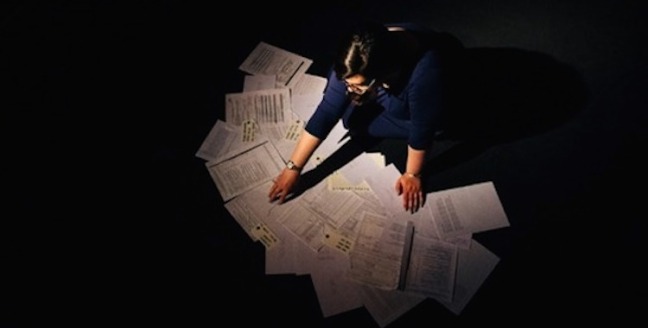 Twice in the last twelve months, I’ve taken a mental health questionnaire – not in the office of a doctor or psychologist, but in the theatre.

At one point in Are You Lonesome Tonight?, Ellie Stamp’s playful but urgent interrogation of mental health, creativity and the perils of diagnosis, she reads out a list of statements and asks us to lower our arms – which are raised at the start of this exercise – as soon as we hear one that describes our experience. Mine is down like a shot; before long, everyone’s hands are back in their laps. And the statements? They describe the symptoms of a recognised mental disorder.

There’s a similar device used in This Room, which takes an affecting look at the treatment of mental illness and what it really means to “get better”. At the start of the show, theatre-maker Laura Jane Dean reads from a list of unwanted, “intrusive” thoughts, later gently asking us which of these thoughts we’ve ever had. They range from worrying that the door has been left unlocked to the sudden, unwelcome, unnerving thought of slitting your wrists or throat when looking at a sharp knife (yep and yep).

Both question the idea of some kind of mental “norm” and divergences from that norm. Both trouble the dichotomy of “ill” and “well”. Both create a space where we can look at ourselves and each other and maybe, just maybe, collectively admit that we’re not OK. And that’s OK.

In This Room especially, well and not well are allowed to sit alongside one another. The room of the title is a doubled, overlapping space, referring both to Dean’s bedroom, where her crippling anxiety began, and to the room where she underwent cognitive behavioural therapy following her diagnosis of obsessive compulsive disorder. These are spaces at once comforting and terrifying, safe and perilous. No more powerfully is this the case than when Dean recalls the time her therapist accompanied her home, permeating the divide between the two rooms, and urged her to confront her fear of hurting herself in her sleep.

Meanwhile the room of the performance, haunted by the presence of those two other rooms, feels like an archive of anxiety. Dean’s medical notes, from which she reads at several points, are housed in boxes and blu-tacked to the walls. From another box, Dean produces a handful of tights, bundled away out of fear that she would use them to hang herself in the middle of the night. As she clutches them in tight fists, holding them out to us, these everyday objects take on an almost alien quality, the fear they represent becoming tangible and heavy in the room.

This Room is full of moments like this, when worry seems to vibrate through the air and tingle on the skin. Dean reads from her case notes into a microphone, her speech faster and faster and faster, skipping along at the pace of her anxieties. She stands on a chair and gazes out at us in a long, suspended moment. The lightbulbs suspended from the ceiling flare and flicker like neurons firing in the brain. All the while, Melanie Wilson’s lightly throbbing soundscape gives voice to the background buzz of unease, its constant hum occasionally bursting into crescendos of panic and fear.

As a viewer, it’s impossible not to be present in the room – this room – and be uncomfortably aware of that presence. At times, as in the vacuum cleaner’s raw and affecting show Mental, the intimacy almost feels too much. Should we really be here? Is it right for these delicate experiences and thoughts to be relived for us? As a result, the power dynamic between performer and audience is one that is always in flux, creating a sense of shared responsibility for this space we’re all in, a space where we might not all be OK.

The questions “am I OK?” and “are we OK?” are ones that are left open. This Room feels like a searching, reaching gesture rather than one that ever reaches a destination or closes a fist around its object. There can be no neat resolution, no satisfying arrival. Because when the thing that harms you is part of how your brain works, how do you get away from that? Where does the illness end and the person begin? And if being “ill” is who you are, then what does it mean to get better?

One thought on “This Room, Battersea Arts Centre”