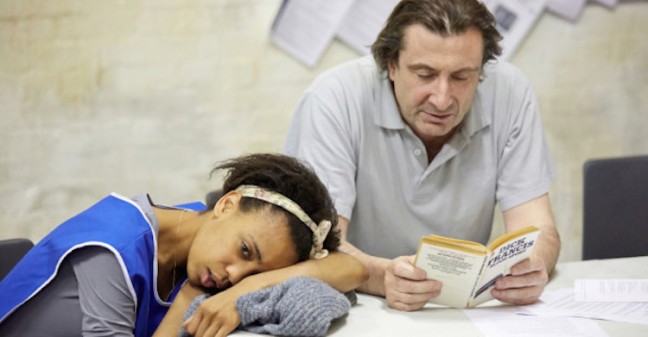 At times, Alexander Zeldin sounds more like a composer than a director. In his rehearsal room, “rhythm” is a popular word, as is “beat”. I’m watching Zeldin and his cast return to Beyond Caring, the hyper-realist snapshot of precarious labour that is transferring into the National Theatre’s temporary theatre following its premiere at The Yard last year. The show is an act of making visible – or perhaps audible. Zeldin stages the fractured daily routines of a group of zero-hours cleaners, with a musicality that draws as much on silence as it does on sound. It’s the ordinary textures of life woven into a theatrical score.

“I think in life there’s already quite a lot of theatre,” Zeldin says later as we sit in the foyer of the National Theatre, watching the everyday performances of passersby. “The theatre is a chance to be ourselves.” This is what’s so disorientating and eventually disarming about Beyond Caring, which refuses to fit human behaviour inside the stage conventions we are so used to seeing. “I think if you don’t do something that’s disturbing – I mean that in the best possible sense – you don’t really have an opportunity to be honest,” the director explains. “You need to create the conditions in which we can really exchange and we can really look at life.”

Zeldin struggles, though, to express the thinking behind this way of working, an approach that is perhaps best witnessed through the work itself. “If we could grasp it, there’d be no need to make the theatre, right?” he points out. I suggest a distinction made by Katie Mitchell between realism and naturalism, two words often used interchangeably to describe theatre. But according to Mitchell, realism is a mode based on recognisable conventions – representations of real behaviour – while naturalism attempts to precisely replicate that behaviour as seen in the world beyond the auditorium. Beyond Caring is in a similar mould, taking care over the minute gestures, pauses and phrases that make up a human life. A head is turned just so; a silence is rehearsed over and over.

Zeldin quotes a Chinese proverb: “don’t think about doing, just do”. Just doing, though, is “a very powerful, very complicated thing”. He continues: “everything I’m trying to do is just creating the conditions in which we can just do. And then we sculpt.” In creating these conditions, his role blurs between writer, director and member of a devising company, hierarchies constantly forming and dissolving. “The distance between the writer and director I feel is a little artificial,” he reflects on the slicing up of roles in much British theatre-making. “If you’re a director, inevitably you want to go and write, and if you’re a writer inevitably you’re going to want to write in the language of presence, space, rhythm.”

His role in the creation of Beyond Caring has strayed into both territories. While it was Zeldin who originated the idea and came into rehearsals with material he had already written, the show is very deliberately described as “written through devising with the company”. The piece has been shaped and reshaped over the years in close collaboration with a group of actors, as well as drawing on extensive research that started with Florence Aubenas’s book The Night Cleaner, an undercover investigation of precarious shift work in France.

For Zeldin, though, research is about experience and individual human interactions rather than about presenting a series of facts. “If you present your research on the stage, why don’t you just give the book out?” he says. “Because it’s going to be more clearly expressed.” Instead, the “meticulous” research undertaken by Zeldin and his cast – including stints working as cleaners – is subtly integrated at the level of character. One of the workers they met, for instance, talked about sleeping on a park bench, planting the seed for a character in Beyond Caring who sleeps in the factory where she works. “I’m not putting a park bench on the stage – that’s the verbatim version,” Zeldin distinguishes.

This, he insists, is where the politics of the show is located: in its form. Beyond Caring is about a controversial political issue – one that is proving to be a key point of debate in the pre-election hubbub – but its take on zero-hours contracts invites audiences to simply look and empathise rather than to engage with a series of facts and opinions. Inevitably, though, the current political context will colour its reception. “It’s a little awkward for me,” Zeldin admits, “because I’m doing a play about zero-hours contracts in the lead up to the election. I care passionately about the political issues at stake, but I hate politicians and politics.”

But he maintains that the style of the piece remains the most important expression of its politics. “I think it’s Tim Crouch who said that theatre happens in the head, not on the stage,” he says by way of explanation. “That’s such a powerful statement. And it happens in the heart; you just touch people, it’s not very complicated. I think we overthink things too much. Theatre is a precious space where we don’t need to overthink.”

Alongside music, another key aesthetic influence on the piece is photography. Zeldin explains that one of the initial inspirations for Beyond Caring was a series of photographs by Paul Graham – “it’s a kind of tribute, in a way” – and in the show he hopes to capture life in the same way that early twentieth-century photographers were able to. “August Sander, who was a photographer in the 1920s, used to go round before people knew what a camera was, so he’d point this thing at them and he’d capture them unaware,” Zeldin tells me. “There’d be a moment when you’d really see somebody, because they didn’t know how to behave in front of this strange contraption. That’s exactly what I’m interested in trying to do in the theatre.”

Achieving this involves precise and extended work with actors. “For me the root of everything I’m doing is the work with the actor,” says Zeldin. The question he is constantly asking of the performers he works with is “what’s at stake?” and his ultimate ambition is for them to achieve “presence”, a word he finds difficult to define. “What does it mean?” he asks, referring to the cliched statement that someone has stage presence. “Let’s be more specific. I think presence is something you can learn. You can develop it, you can train it.”

Beyond Caring, for instance, has been a long time in the making, and Zeldin has been working with some of the actors in the show for five years now. He characterises their process as completely collaborative, describing all of the performers as “massive contributors” to the show. “Hierarchy is dead,” Zeldin states unequivocally. “The director as god is bullshit, it doesn’t work. We’re in a room, we’re making it together, it’s got to be like that otherwise it’s a waste of time.”

“Theatre has to be alive in every second,” Zeldin continues, unforgiving in his expectations of the art form. “How can you do that? You need to create the conditions in the work where there’s a constant interrogation.” He recalls the experience of assisting Peter Brook – his greatest influence and inspiration as a director, as he stresses more than once – and being told to change something in the production every night while on tour. “It was about finding a readiness, an alertness.”

None of these working practices find a natural home in the British theatre industry, with its freelance culture and typically short rehearsal periods. For this reason, Zeldin – who is currently associate director at Birmingham Rep – aims to one day start his own company. “My ambition is to keep a group of actors together for ten, fifteen, twenty years,” he explains, brushing aside the audacity of this aspiration. His answer to practical obstacles is, perhaps, the best expression of his approach to theatre-making: “I think you have to do things that seem impossible.”