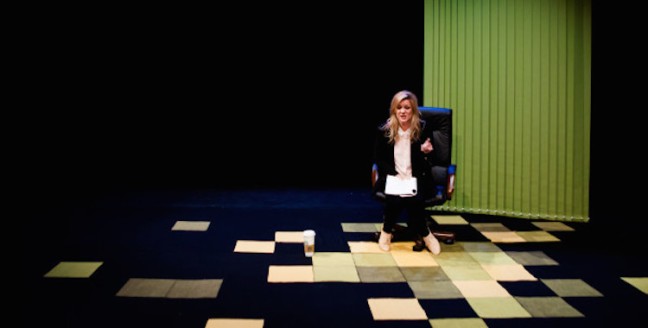 There’s something behind Olivia Poulet’s eyes. It might be steely pragmatism. It might be desperation. It might be suppressed disbelief at the spectacularly awful script she is determinedly trying to sell. It might, worse, be genuine passion for the regurgitated tropes she’s trotting out. It might even be dollar signs, if the starlet she’s pitching to gives the nod.

Mark Ravenhill’s monologue is a witty parody of the film-studio hard sell, the product of its title a slice of syrupy Hollywood cliché – the kind that rots your teeth. Girl meets boy. Girl goes on journey. Love over all else. It’s sharp, clever, self-satisfied. Only in the (nervously gesturing) hands of Poulet does it become something more than that. As a riff on the cynical, opportunistic practices of movie executives, Product is arch and entertaining. As an essay on shit-shovelling desperation, it’s blackly depressing.

Poulet is Leah, the producer charged with getting a star name on board for a new project. Problem is, the project in question is Mohammed and Me, a post-9/11 mash-up of romcom and jihadism with a cameo from Osama Bin Laden (yes, really). Sitting in for Julia, the actor selected to save this rapidly sinking ship, we’re treated to Leah’s increasingly frantic pitch as she takes us on the emotional journey of “three-dimensional” lead Amy. “I would love to see you play three-dimensional,” she croons at us, smile fixed.

Folding the War on Terror into classic chick-lit formula, Mohammed and Me is the doomed love story of a 9/11 widow and a suicide bomber – or, in appearance-obsessed Hollywood-speak, a Versace-clad businesswoman and the “tall, dusky fellow” she finds herself sat next to on a flight. Step aside Romeo and Juliet; this is a star-crossed romance like no other. Leah walks us through the movieland Holy Trinity of attraction, separation and reunion, with bomb threats and prison break-ins thrown in for good measure. “This is the world of the heart,” she earnestly intones, with all the persuasion of one who’s never had call for the organ.

It’s clearly tripe, with Ravenhill using the godawful script in Leah’s hands as a vehicle for taking pops at everything from Hollywood’s casual misogyny to its obsession with sex and violence (the two often barely distinguishable from one another). There’s a transformation montage scene, a blandly identikit mother/aunt/neighbour figure – “she’s too old to fuck, too old to kick ass, but we still have a place for her in our world” – and a suitably slushy soundtrack. Tick, tick, tick.

But what Poulet does in Robert Shaw’s production is give the money-making behemoth of Hollywood human context. Darting her eyes from side to side, appealing to us with her ever-moving hands, narrating the plot of Mohammed and Me with desperate abandon, Leah has the look of a woman possessed. What she’s possessed with, exactly, is ambiguous. At moments, she seems swept away by the story, eyes closed in its telling. At others, she’s practically gagging on this material, correcting herself mid-sentence: “This material is fab – is going to be fabulous once it’s punched up”. Either way, there’s a constant undertow of desperation and self-deceit, hinting at all the things we force ourselves and others believe in the name of self-interest.

Having the monologue spoken by a woman (it was originally performed by Ravenhill himself) also twists it in intriguing directions, glazing the misogyny with an even sourer coating. When Leah patronisingly says that she “cried like a woman” and jokingly refers to her listener as a “bitch”, you sense that she really means it. Especially in Shaw and Poulet’s interpretation, this isn’t just about the movie industry; it’s about all those oppressive internalised narratives – of sexism, of racism, of greed – that twenty-first-century capitalism shoves down our throats. The scariest suggestion is that we might just end up swallowing them.