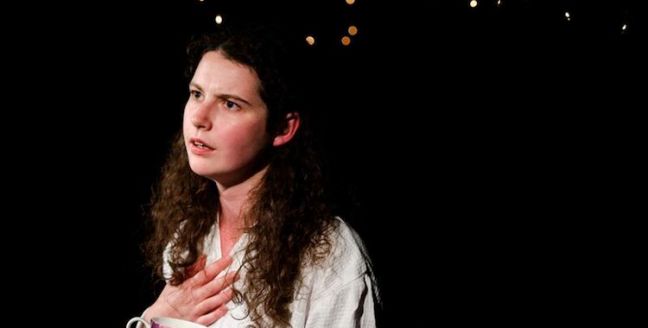 They’re a package deal. A team. Ross & Rachel. An ampersand permanently between their names. Over the years, though, that innocent bit of punctuation looks less and less like a symbol of love, more and more like a tightening knot. What happens to you as an individual when you’re always part of a pair?

James Fritz’s play picks up after the big reunion and the happy ending. This is ‘The One Where it All Fucks Up’. In this fragmented monologue, two partners – unnamed, but with repeated allusions to the Friends couple of the title – are so tightly intertwined that they have one voice. In Thomas Martin’s beautifully simple production, Molly Vevers performs both halves of the pair, snapping rapidly back and forth. If it’s not always clear who’s speaking, that’s part of the point.

Mere years after finally getting together, the couple are already beginning to drift apart when we join them. For Ross, the language of love is the language of possession. “She’s a prom queen and she belongs to me,” he gloats at parties. Rachel, meanwhile, bristles at this yoking of her identity to his, complaining “I don’t know when people started saying our names together”. She’s toying with the idea of an affair with a work colleague; he’s plastering a forced smile on a relationship that’s far from picture perfect.

Fritz shows relationships as moulded by the expectations of others, whether those others are millions of television viewers or a tight circle of friends and family. There’s always the pressure to resemble the perfect image, to fit into whatever shape society tells us is right. That shape might come from Friends, but it might also come from romcoms or magazines or the great old love stories passed from generation to generation.

The play is canny, then, in not overplaying the Friends references. There are plenty of light nods to the show (even Ross’s infamous “we were on a break!”), but these never overpower a narrative that could just as well be happening to any couple drifting apart in their 40s. And when true disaster strikes, it’s never TV-show dramatic, just sad and shitty and unextraordinary. Suddenly, faced with the prospect of an abrupt full-stop to their relationship, Ross and Rachel are also confronted with their differing ideas of what that relationship was in the first place.

It can be exhausting to watch, as Vevers flickers frantically back and forth between conversations, thoughts and fantasies. Her extraordinary performance somehow allows us to feel these two people uncoupling, to sense the distance between their voices even as they’re spoken by the same person. This gradual breakdown is contrasted with the romantic iconography of Alison Neighbour’s set design: all flickering candles and twinkling fairy lights. Promise butts up against reality.

The play could be accused of a narrow focus, but it knows its targets and strikes hard. Ross & Rachel does a comprehensive job of de-mything romantic love, attacking its language, its imagery and its underlying hints of misogyny. At the same time, it acknowledges how hard it is to let go of that myth and how devastating it can be when the perfect picture shatters. Ultimately, we want to believe in the happy ending, because it’s easier than the alternative.