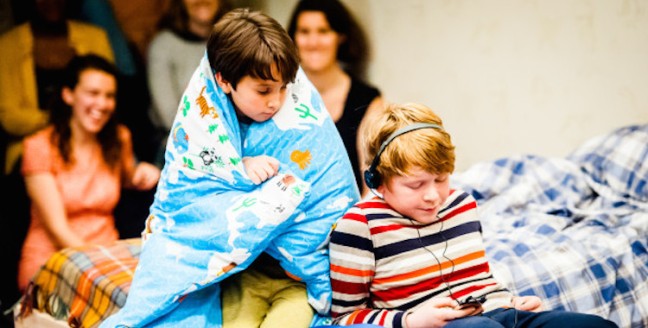 “They were here,” insists one of Medea and Jason’s two ill-fated sons. “They existed.” He’s talking about mammoths, a disputed answer in the boys’ animal game. But the comment applies equally to the pair of tragic children at the heart of Euripides’ play, integral to the plot yet not allowed to assert their own existence. Kate Mulvany and Anne-Louise Sarks’ version of the tragedy refocuses events, offering us the children’s perspective and in the process making them more than simply the victims of fate. They were here. They existed.

It’s a compelling conceit for adapting a tragedy that is stubbornly problematic. Here, for a change, the concern is less with explaining how a woman could possibly kill her children and more with what those children might make of it all. Leon and Jasper are, like so many children of divorce, trapped between warring parents. They are also quite literally trapped, locked inside their bedroom while Medea and Jason thrash out their differences downstairs. Amy Jane Cook’s detailed design – all toys and clutter and a constellation of glow-in-the-dark stars tacked to the walls – invites us into that bedroom, limiting the boundaries of the drama to the four walls of the two boys’ imaginative world.

And so we watch them being two young brothers. They’re playful and cruel and silly and serious. The sibling squabbles – especially as cheekily, unaffectedly performed by the fantastic Keir Edkins-O’Brien and Bobby Smalldridge on the night I attend – are beautifully observed (and I write with the authority of a sister of three fiercely competitive younger brothers). They pelt each other with plastic ammo from toy guns and try to outdo each other in games and contests. They call each other names: “idiot” and “nincompoop”. They taunt and tease. Most important of all, they’re ordinary, more human being than myth.

There is, though, a subtle undercurrent of danger that Mulvany and Sarks play with throughout. Thanks to the notoriety of those three little syllables in the title, as an audience we can be relied upon to collectively hold our breath, waiting for the storm to break. The show opens with Leon splayed out on the floor, playing dead. The scene is chilling in its prescience even as we laugh at Jasper’s tactics to rouse his brother – everything from dragging him across the floor to farting in his face. Later, when the two boys play at war, it’s with a lingering awareness on our part of the conflicts raging beyond their locked bedroom door.

Mulvany and Sarks’ take on Medea, though, runs the risk of becoming too ordinary. Like the Belvoir’s determinedly prosaic version of The Wild Duck, this production transposes the classic into the everyday. It’s Medea as divorce play. Emma Beattie’s desperate, broken Medea is just a mum faced with the unthinkable prospect of losing her children, the sons just two regular kids caught in the crossfire. When the mythic does intrude, in playful references to the Golden Fleece and the Argo, it feels oddly out of place. That choice, of course, asks questions in itself. What’s so special about these two boys and their untimely deaths? What, after all, is the significance of myths and tragedies? What can these ancient narratives tell us about how we live now?

But where The Wild Duck was devastating in its shattering of an unremarkable family, this Medea gives itself nowhere to go save the inevitable. We know what’s coming. “We’re completely powerless,” says Leon, gazing up at the glowing stars on the walls and speaking more truth than he realises. While the children’s perspective is a novel one, though, its limited scope can offer neither explanations for nor ramifications of the terrible act that ruptures the world this production carefully builds around Leon and Jasper. It’s just a horrifying full-stop.