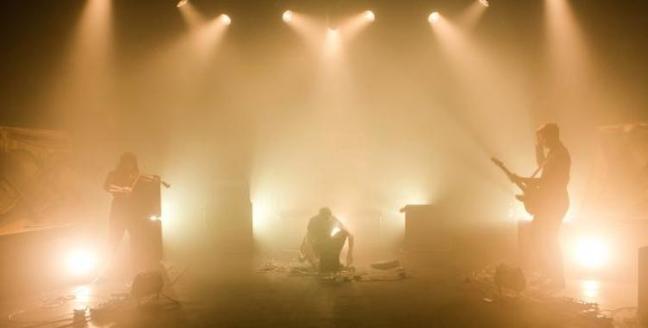 Lots of people talk about community in the theatre. I’m one of them. For the hopeless optimists among us, the communal space of the theatre holds a certain political potential, a certain utopian allure. Here we are, together.

But actually, in a lot of ways, the gig is more communal than the theatre show. In a theatre auditorium you’re (generally) separated from your neighbour by a few inches, a veil of politeness and maybe an armrest. Gigs, on the other hand, are all proximity and excitement and sweat. People moving as one, singing as one. Bodies connected by the vibration of basslines. Here we are, together.

Kissing the Shotgun Goodnight is caught somewhere between the two. We sit in raked seating, keeping polite distances. We are, I think more than once, remarkably still. Yet this is, as Chris Brett Bailey’s scribbled-over marketing copy tells us, “a concert sprinkled with words”. Formally, it’s more gig than theatre show. Bailey and fellow band members Alicia Jane Turner and George Percy play us a haunting, disturbing and eventually ear-splitting post-rock symphony, building up to the volume of a small plane taking off.

Caught in the midst of all this incredible noise, though, we in the audience don’t sway or stamp or mosh. Instead we sit stiffly, disconnected, together but not together. That’s the problem with a lot of recent so-called gig theatre (a label that Bailey and co have – deliberately, I’d guess – avoided): it jettisons too much of the experience of gigs, creating events that feel diluted and frankly just a bit awkward. It tries to bring something of the gig into the space of the theatre without thinking about what the space of the theatre actually does to those inside it.

Perhaps, though, the theatre is the right place for Kissing the Shotgun Goodnight, for all the reasons it seems like the wrong place. Because Bailey’s show doesn’t feel communal. It feels, if anything, sort of atomising. Perhaps that’s because I’m a wimp with bad ears who promptly shoved in my earplugs for all the really loud bits and so felt wrapped in slightly muffled (but still fucking loud) sound for half the show. But it also feels in keeping with the whole gesture of the show that we’re each sucked into an individual vortex of sound, dragged down into our own personal abyss. Even the speech, with its fragmented swirl of death and horror and chaos, is disconnected, spoken not by Bailey in front of us but by his disembodied voice through the speakers.

For Bailey, as he explains in the programme, Kissing the Shotgun Goodnight is the product of a death heavy year. For me – and for many others watching, I suspect – it’s been a heavy year in countless ways. Kissing the Shotgun Goodnight speaks to this year, or at least so it seems to me. I can’t quite shake the urge to compare it to This Is How We Die (because, as much as this is clearly trying to do something different, that previous show was so heart-thumpingly thrilling that it can’t help sticking around in the memory), but actually what feels at first like it’s missing from Bailey’s follow-up is perhaps aptly, intentionally absent. There’s none of the comfort of humour or narrative here, and relatively little language to hold on to. Instead it feels bleaker, more violent.

At first, Kissing the Shotgun Goodnight seems to play up to the expectations of This Is How We Die fans, its initial voiceover almost a parody of that earlier show and its Beat-poetry rhythms. From there, though, it moves into much darker and potentially alienating territory, continuing a journey into oblivion that began with that astonishing blast of sound at the end of This Is How We Die. It might not be a show to intensely love, but it’s uncompromising in its own intensity.

And it leaves me feeling oddly isolated from the people around me, even as the same vibrations rattle through our bodies. It suggests the distance of understanding that Bailey alludes to when considering why someone might be drawn towards suicide: “You’ve got no idea what it was like to walk to the fridge in their shoes, let alone a mile.” Sometimes, in spite of all theatre’s capacity for generating empathy, we just can’t understand.

Here we are, together yet alone.

Photo: The Other Richard.