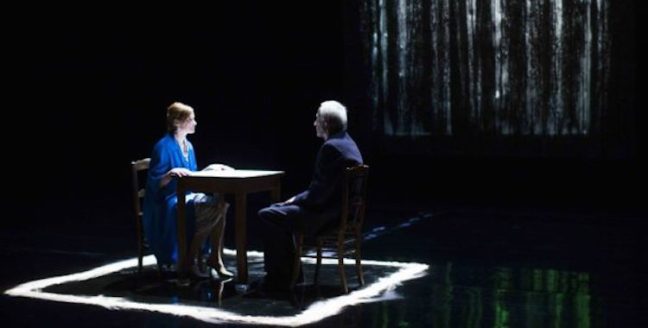 Without Blood is a show of contrasts. War and peace. Revenge and forgiveness. Sound and silence. Light and darkness. White chalk footprints on a smooth black floor.

Yet for all those contrasts, all that black and white, it’s essentially a piece about grey areas. It inhabits those murky moral zones that expand during times of conflict, when murder is recruited to the cause of the greater good and the lines between right and wrong look increasingly shaky. A group of men kill in cold blood. A child is caught up helplessly in the violence. The cycle of pain and retribution goes round and round.

Inne Goris’s production is an adaptation of Alessandro Baricco’s novella of the same name, which tells a story of war and its consequences that is deliberately blurred at the edges. The catalytic events – never seen, always heard or described – have taken place during a four-year war, but neither nations nor sides are named. We’re left wondering where this is and what was being fought for, forced to decipher the unravelling narrative with patchy guesswork.

There is, thanks to this deliberate vagueness, something of the allegory to Without Blood. At times in Goris’s version it even seems like a dark fairytale, with its odd, occasionally almost fantastical, storytelling and the haunting presence of a child clad in red. This child is a young girl whose father and brother were killed by soldiers while she hid under the floorboards. Now, 52 years later, her older self sits across the table from one of those soldiers – the one who found her and quietly let her live. Many years after a war that never really ended for either of them, they stare across at one another and tell their stories.

Goris’s approach is all tell, no show. Speaking about themselves in the third person, at one remove from their own traumatic experiences, the two characters narrate the past that we are denied access to. Only in the opening minutes, under cover of darkness, do we get a glimpse of the events that knitted together the lives of the two protagonists, and even then it is through the abstracted forms of music and minimal projected text. There is a sense that war is not something that can be straightforwardly represented.

It ends up feeling, though, like the novella has been simply placed on stage, rather than having been adapted into a distinct theatrical idiom. With so much of the show consumed by slow, static speech, it’s a struggle to maintain the concentration that would be held rapt by the same words in prose. The stories themselves are compelling, but their telling lacks any dynamism.

That’s not to deny that there are some striking touches. Dominique Pauwels’ music opens the show with a jolt of horror, its aftershocks ringing periodically through the quiet conversation that follows. The outline of chalk around the table where the two characters sit, meanwhile, lightly suggests the division of past from present – a division made ever more permeable as the ghostly figure of that girl under the floorboards walks across and through it, trailing white dust.

“You have an odd way of telling things,” says the former soldier to the little girl grown old. The same could be said of this production, whose strangeness and stillness become increasingly frustrating. The pain of war might persist, but Goris and her team never make us feel the sting.