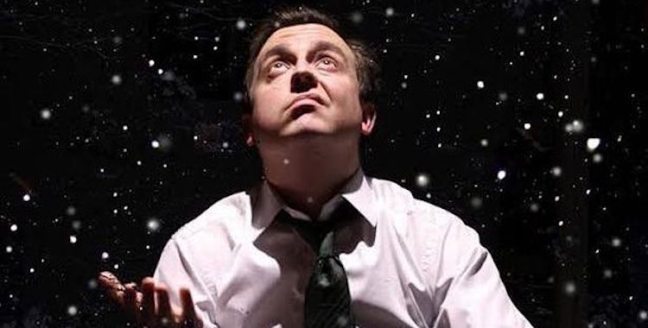 Christmas is ripe for disappointment,” acknowledges writer and performer Jonny Donahoe with a chuckle. “And yet we’re so excited about it.” Donahoe’s new play, 30 Christmases, celebrates both the joy and letdown of the festive period, from family traditions to family arguments. It’s one of a number of shows bucking the pantomime trend this year and offering a more ambivalent take on the holiday.

Playwright Matthew Bulgo acknowledges that Christmas Day is “a real crucible”. As such, it’s a gift for a dramatist. Bulgo’s play Last Christmas, about a man who returns home to confront his demons, wasn’t originally set at this time of year, but “the tinsel and the baubles and the pudding just snuck in somewhere along the way”. For Bulgo, Christmas was “the perfect context to address those issues of family, friendship and home because it seems like the time when you almost can’t avoid them”. Donahoe makes a similar point, observing that “Christmas is something that punctuates everyone’s year, whether they like it or not”.

Both Donahoe and Bulgo are exploring how the past erupts into the present at this time of year. In Donahoe’s show, he and comedian Rachel Parris play siblings telling the story of the Christmases – both happy and sad – that they’ve shared. Bulgo’s protagonist, Tom, is travelling back to see his family in Swansea for the first time since his father died. Like Scrooge in A Christmas Carol, Tom is “absolutely riddled with flaws” and is “tied up in knots about regrets from the past”.

At the National Theatre in London, another kind of family drama is at the heart of Love, the new show from writer and director Alexander Zeldin. The play follows three families who have been placed in temporary accommodation, exposing a side to Christmas that is rarely made visible. Zeldin was inspired to make the show after a friend at the housing and homelessness charity Shelter sent him their annual report on families spending Christmas in B&Bs. “For me, the starting point is never a political idea,” Zeldin says. “It’s always a human moment or encounter.” Reading Shelter’s report, he was struck by the voices of “women with young children speaking very simply about what it’s like to live in terrible conditions in a tiny room, with all the kids piled up together and strangers around them”.

While researching the play, Zeldin stayed in hostels himself and met many families in temporary accommodation. This year Shelter estimates that more than 120,000 British children will be homeless at Christmas. This is something that Donahoe has been thinking about. 30 Christmases has been made in partnership with the Old Fire Station in Oxford, which doubles up as a Crisis centre for homeless people. “It’s the perfect place to put on a show about Christmas,” he says, “because we don’t exactly have a perfect society.” He recalls meeting the head of the biggest homeless shelter in Oxford during the making of the show. “She said, ‘We get lots of people trying to volunteer for Christmas Day and we don’t need that, we need things all year round.’ So I wanted to address that as well, and look at the way we think about what Christmas is and what it represents to us.”

The question of what Christmas means is there in all three shows. Zeldin is interested in Christmas “as a metaphor of someone sacrificing themselves for something broader, or of hope being invested in a child”. He also suggests that, as a time of year when people come together, Christmas “provides good conditions” for theatre that aims to create a collective experience among strangers.

These three plays might eschew the glitter and glee of pantomime, but they are nonetheless optimistic. Donahoe stresses that 30 Christmases is “incredibly upbeat”. Throughout the show, which features festive songs from Donahoe’s band Jonny and the Baptists, he and Parris come up with new Christmas games, foods and drinks, inventing their own traditions. “It’s about two people trying to discover new rituals,” he explains. “Having gone through a Christmas trauma, they decide to make it their own thing.”

Bulgo says that audiences for Last Christmas (which has had several outings since its premiere at the Sherman Cymru, Cardiff in December 2012) describe it as “the kind of show that makes you want to leave the theatre and call your loved ones and tell them how much you love them”. Zeldin, meanwhile, wants to show “the strength that comes from parental love and the love people have for each other inside the family”.

More than anything, the shows challenge the image of Christmas perfection. Christmas comes in many guises, but perhaps that’s no bad thing. “It’s usually a day marked with over- and under-cooked food and too much alcohol and shouting across the table, but also there’s something incredibly joyful about that,” Donahoe insists. “Those rituals are just as important as mistletoe and ringing bells and singing carols.”