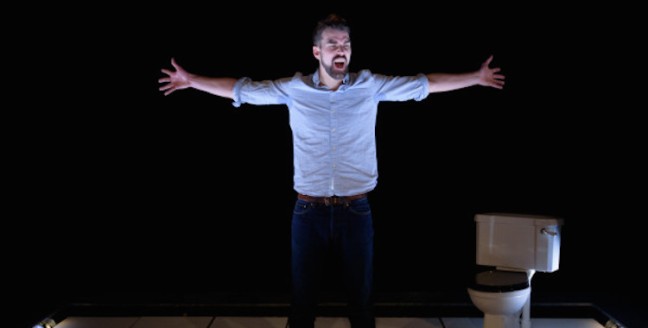 The title of Rob Hayes’ latest play is a promise. This will end badly. And not just for the trio of troubled protagonists whose stories his fragmented, three-part monologue rapidly snaps between. The whole male sex, contorted under the pressures of modern masculinity, comes out of this badly. As his portraits of wounded, angry men make clear, it is not only women who suffer under the rigid, oppressive structures of patriarchy. Hayes’ prowling alpha male character, describing tactics for picking up women, puts it most succinctly: “it exists within a framework”.

The framework of the piece itself, however, is often unclear. It begins confusingly: performer Ben Whybrow, intense from the outset, rattles through the words at astonishing speed, clearly speaking from more than one perspective – but whose? Only gradually do three distinct (and sometimes less distinct) voices emerge. One man, reeling from a recent breakup, is suffering from a case of extreme constipation; it’s almost two weeks since his girlfriend left him and he still can’t take a dump. Another is trapped by different forces, confined to his flat by chronic anxiety and OCD, frantically turning switches on and off. And a third is on the hunt for casual sex, in the process of making his latest conquest. If the three are occasionally difficult to distinguish from one another, it’s surely deliberate. These three men represent three jagged shards of modern masculinity, all harmed and harming as part of the same, long-entrenched system.

The central scatological metaphor – immediately signalled by the toilet in one corner of Jemima Robinson’s otherwise sparse set – can’t be missed. A lot of shit has built up here, and it’s not so much hitting the fan as poisonously accumulating. The message may not be subtle, but it lands with force in Clive Judd’s relentlessly fast-moving production. These men are emotionally as well as physically constipated, blocked up by a world that tells them to control their feelings, to project confidence, to dominate others. What we see is a male culture that has little room for vulnerability or tenderness; a culture in which suicide – the statistics of which one character obsessively lists – might seem like the only way out.

There are points of meeting and overlap with Chris Goode’s furious, scaldingMen in the Cities, another collection of voices from men flailing under the violence of patriarchy. Next to Goode’s piece, though, This Will End Badly feels strangely incomplete, stating rather than interrogating its points and at times doing little more than replicating the abuse it examines. It is also, unlike Men in the Cities, overwhelmingly preoccupied with the predicament of the straight white man in today’s society, a choice that sharpens its focus but at the same time narrows its scope.

The pick-up artist – his monologue tellingly titled ‘Meat Cute’ – is in many ways the most interesting and the most problematic of the three men put on stage. He speaks in the plural first person, always ‘we’ and ‘us’, as if acting as a conduit for the entire gender. He could also be a conduit for countless opinion pieces and online comments about sexual politics and consent, mansplaining the media’s impossibly contradictory standards of femininity (“How do you even know what you’re supposed to want?”) and toying dangerously with rape apologism. Hayes’ introduction of these issues is blunt and bludgeoning, especially when knocking up against the humour elsewhere. When occupying this role, meanwhile, Whybrow often delivers lines directly to (always female, as far as I could tell) members of the audience, with an aggression that wavers between the ironic and the downright violent. It raises a serious question, especially with material that may be a trigger for some: when does a representation of harm become simply harmful?

This is not a question that This Will End Badly really attempts to address, instead using these difficult moments as part of its (admittedly formidable) critical arsenal. Still, it’s a disturbing and intense window on the twenty-first century man, its abrupt conclusion leaving behind a lingering sense of unease. The urgent implication, as the whole destructive cycle prepares to start again, is that if something doesn’t change then things will continue to end badly – again and again and again.

There’s something elemental about Sparks. It’s all water and fire: two opposing forces meeting, like the two sisters at the play’s heart. Jess turns up on Sarah’s doorstep drenched, clasping a fishbowl in both hands. “Soaked,” she says. “All the way through. Think I’ve got. Got wet bones.” Sarah, when she allows herself to dream, dreams of the stars, burning fiercely in the sky. It’s the night before bonfire night, the country prepared to briefly ignite, but for now the water pours steadily down.

This is the tenor of Simon Longman’s play and Clive Judd’s production at the Old Red Lion: lyrical, dreamlike. Pared back to the basics, Sparks might not sound like much. A woman returns home to see the younger sister she abandoned twelve years previously, desperately attempting to turn back time. The domestic drama of the homecoming is hardly anything new. And yet … “transcend” is a word used too frequently and too carelessly, but it feels justified to say that Sparks transcends its premise, becoming much, much more than the sum of its parts.

There is, at first, a spikiness to the situation established by Longman and Judd. Sophie Steer’s Jess, vibrating with anxiety, vomits out a relentless flood of words. She can’t stop talking. Sarah, on the other hand, can barely wrench a single syllable from her throat. As played by Sally Hodgkiss, she’s frighteningly still, paralysed by shock. The older sister dances around the younger, her jittering energy spreading outwards in ripples to the audience. We’re tensed, waiting for the confrontation or revelation that dramatic convention dictates must be just around the corner.

But like Alice Birch’s Little Light – another dagger-sharp and devastating play about families and the passing of time – Sparks keeps us waiting. There’s a lot, in fact, that the two pieces have in common. Both take familiar, arguably even hackneyed dramatic set-ups and delicately subvert them, stretching the expectations of an audience almost to breaking point. And both revolve around the fragile relationship between two sisters, bound together by blood and memories yet ripped asunder by events.

In the case of Jess and Sarah, they are speaking across a gulf, one that only seems to widen for most of the first half. Jess is frantic, speaking to fill up the silence, while Sarah gives her little in return. One speaks in outpourings, the other in clipped half sentences. Yet, perhaps most surprisingly of all, it’s funny. Dark and desperate, yes, but funny all the same. The careful rhythm of the performances highlights the jarring humour of awful situations – that very British tendency to find something to laugh about even from the depths of despair.

Indeed, careful might describe the whole production. No choices feel thrown away. The style is naturalism shot through with memory and, at moments, a little bit of magic. Subtle (and one less subtle, but completely earned) shifts in Mark Dymock’s lighting take us back through time as both sisters gradually pick over the past; likewise Giles Thomas’s sound design, which you hardly notice until suddenly you realise it’s transported you. Jemima Robinson’s design, unfussy and realistic for the most part, uses the tiny but significant detail of peeled back wallpaper to suggest the tearing away of the years. Peeking through underneath, a Winnie the Pooh pattern – the one visual reference to Jess and Sarah’s fraught, shared childhood. And the swapping of the two central roles each night, a device that could be no more than a gimmick (albeit an impressive one), makes complete sense for a play that deals so much with the roles we fall into in a family.

In the end, what matters more than the discovery that we’re primed for – the unexpected twist, or the key to this strained sibling relationship – is simply these two characters in the same space together. I’m reminded, alongside Little Light, of Robert Holman: as in so many of his plays, Sparks is about the people and the conversation. Longman’s dialogue is exquisitely crafted, as accomplished in tense, terse exchanges as in meandering, almost poetic speeches. It doesn’t matter that little really happens to the two protagonists over the course of the play, because so much happens between them. It’s simple, perhaps, but startling nonetheless.