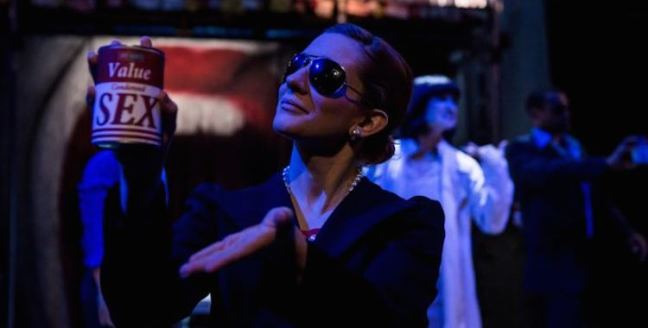 Ever since seeing Alice Birch’s searing Revolt. She said. Revolt again last summer, I’ve thought of it as the feminist play for my generation. A generation raised with the base assumption of equality into a world we slowly realise has been cruelly mis-sold to us. A generation oddly cautious about the word “feminism”. A generation that briefly thought maybe the battles had been fought and won, when actually we just have to fight ever more insidious forces. For this generation and the ones immediately following it, this is the play that I want other young women – and men – to discover and have their minds blown by. It’s raw and angry and sad and fierce and funny and lost and searching and hopeless and hopeful.

All that and more surfaces in the gaudy metaphor of We Want You to Watch. As ever in RashDash’s work, ideas are expressed as much through bodies as through language. As the subject of Greenland and Goalen’s interrogation rebukes their arguments, the two performers buckle to the ground, limbs contorted in defeat. Later, expressing what watching porn feels like, their bodies thrash violently across the stage, the effect vivid and queasy. The pornography that seeps into everything is never seen, but its imprint leaves an indelible stain on the movement. Birch’s words can bruise too, especially in a heartbreaking speech delivered to the next generation.

The further Greenland and Goalen pursue their mission, though, the more strained and stretched the metaphors become. Eventually, they track down a teenage internet hacker, frantically defending their position while responding to ever more ridiculous demands. There’s only so far the dramaturgy of failure can go, and as the piece goes on it verges dangerously close to tedium, its once fierce arguments now weary and sluggish. There’s an aptness in that, of course, but it increasingly struggles to land. Beginning to feel restless, I wonder if the hard-line starting point is as much of a burden as a provocation.

That said, there’s an appealing boldness in staking out an uncompromising position, in refusing to accept “the shittest consolation prize on the planet”. In the unapologetic yet problematised stance of We Want You to Watch, there are echoes of both Revolt and RashDash’s last show Oh, I Can’t Be Bothered, which tussled just as painfully with the idea of romantic love and the suffocating demand to find “The One”. In the tackling of another feminist issue, I was hoping for a collision of those two approaches, each complex and messy and exhilaratingly theatrical. We Want You to Watch isn’t quite it. But like Revolt, it prises these conversations open, using anger and a stubborn refusal to back down as a way of pushing forward its central debate. And even in its failure, it dares to dream of a new start.

Rip it up and start again.