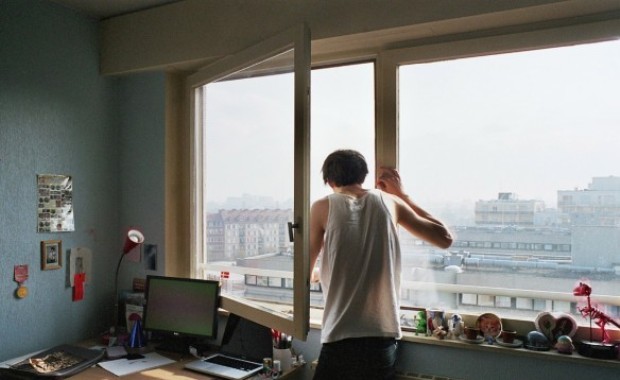 Watching as a recent graduate, Ella Hickson’s latest play is both mildly terrifying and depressingly familiar. Her broken, desperately partying characters painfully evoke the rabbit-in-the-headlights panic of confronting life after university, while Chloe Lamford’s precisely detailed design, right down to the cupboard handles (though thankfully excluding the mess), is almost a carbon copy of my own student kitchen. Coupled with the frantic, competitive drinking and the forced irony of fancy dress, Boys induces a heavy and slightly uncomfortable sense of déjà vu. I’ve been here before.

Hickson’s play comes underscored with a quiet cry of “we’re fucked”. Her graduating students, Benny and Mack, are about to go out into a world that doesn’t want or care about them, leaving a childhood that has promised them everything to enter an adult life that will most likely deliver nothing. Meanwhile, one of their housemates, Cam, freaks out in the face of a concert that could change his life, and the other, Timp, stands as a cautionary example of the monotony of getting stuck in a dead-end job. It’s the boys’ last night together before they must all move out and there’s only one thing they’re certain about: they are going to have one hell of a party.

Perhaps unsurprisingly, none of Hickson’s characters want to grow up. From eternally partying Timp, about to enter his thirties with the mentality of an eighteen-year-old, appropriately dressed as Peter Pan, to the students in denial about their swiftly approaching graduation, there is a stunted, childlike atmosphere to this world. It is not insignificant that the fancy dress theme they choose for their end-of-year party is Disney. Nostalgia taints everything in this backward-looking environment, because the future is just too scary; everyone has their heads buried in the sandpit.

While they put off tomorrow, the boys’ riotous embracing of today is frequently hilarious. Once again the déjà vu attacks, as Hickson perceptively captures the banter and bravado of student dialogue, nailing every last reference and successfully distilling that youthful cocktail of forced confidence and crippling insecurity. These contradictory elements both surface too in the utterly convincing performances of the young cast, who paste over fragility with indifference and play wasted with slurring commitment. Much as he did with Headlong’s strikingly youthful Romeo and Juliet, director Robert Icke injects proceedings with an espresso shot of energy, as the youngsters dance on the table and aggressively knock back drinks.

This edges close to a Skins-esque view of “yoof”, all pints, pills and parties, but Hickson is too clever to pigeon-hole her young characters in the same way that the media is so often guilty of. Beneath the bloodshot eyes and strained façades, tenderness blinks through, while the crude harshness of male banter is softened slightly by the presence of Timp’s chatterbox girlfriend Laura and guarded, delicate Sophie, the ex-girlfriend of Benny’s brother. Benny, whose wounds are closest to the surface, feels the need to fix things – perhaps a reaction to his own brokenness, poignantly conveyed by Danny Kirrane. This is set in opposition to Samuel Edward Cook’s tough guy Mack, who aggressively insists that we are all responsible for ourselves and no one else in a particularly unappealing portrait of staunch individualism.

Through such relationships, Hickson grapples with a wide collection of ideas, some with more success than others. The central nugget is this rage at a world in which the future of the generation now graduating is uncertain at best and stark at worst, but plenty more is going on here. The young characters question what it means to be successful, what the purpose of knowledge is, whether we are responsible for others, if it is still possible to have faith in anything. There is a sense of searching, though this can turn into clumsy fumbling. The scope is to be admired, but sometimes the execution is crude and clunky, increasingly so in the meandering second half as external riots intrude into this claustrophobic pressure cooker. Hickson stalls and starts up again, offering what feel like dramatic conclusions before ploughing on, and eventually soothing the sting of her message with sentimental catharsis.

Hickson’s metaphors, like her plot, start out arresting but end up overdone. The pile-up of rubbish bags caused by local strikes (yet another situation familiar to me from my own student days) becomes a repeated symbol of the trash mounted up by previous generations that is now beginning to rot and fester, asking questions about how we clear it up. Do we simply follow suit and dump our mess on others – the “inalienable right to dump your shit on someone else”, as Mack sneeringly puts it – or must we keep it inside with us and let it poison the air we breathe? This returns to the debate between Benny and Mack about responsibility, but is pushed beyond resonant, underlying significance into the glaringly obvious, until the whole kitchen is swamped in rubbish. By the time the characters eventually set about cleaning up, the symbolism has lost all potency through heavy-handed repetition.

While the conclusion may collapse into sentimentality, it is fitting that there are no easy solutions or resolutions offered in the face of a hostile world that the boys are reluctant to enter and approach with a sigh of apathy. Echoes of Mike Bartlett’s Love, Love, Love can be heard in the youngsters’ resigned recognition that they will never achieve or earn as much as their parents, while the laboured metaphor of the ever increasing rubbish repeats the idea that this generation did not create the mess we are now having to clean up. I was also reminded of another Bartlett line, this time from Earthquakes in London: “bad things are happening, let’s bury our heads in the sand”. This is certainly the mentality of Hickson’s characters, who are only briefly able to look their own bleak future in the eye before returning their gaze to the immediate debris.

Reflecting at a slight distance, it occurs to me that while the ending falters, this might just be somehow appropriate, if disappointing. Hickson writes herself into a situation that is difficult to conclude; the generation she writes about (which just happens to be my generation) is finding it equally difficult to envision where we might end up. Not an intentional symmetry, but a strangely apt one. Conclusions are not forthcoming in either case. Perhaps being young is, in Cam’s words, “as good as it ever fucking gets”.  And in today’s world, that is possibly the most depressing idea of all.