The first time we see Nell Gwynn, she’s one of us. In the Globe’s rowdy retelling of Nell’s rags-to-riches life, the famous restoration actress starts among the groundlings as just another admiring – if mouthy – spectator. Soon, though, she’s treading the boards herself, first at Drury Lane and then on the nation’s stage, as the favoured mistress of King Charles II.

Both Jessica Swale’s text and Christopher Luscombe’s production are playfully conscious of their theatrical surroundings. Nell Gwynn is a play about theatre as much as anything else: its joy, its artifice and its uneasy marriage of entertainment and education. This Nell is a people’s heroine, playing to the stalls and courting laughs, but she also has bigger concerns, boldly demanding more from the simpering roles she’s cast in.

Swale has bigger concerns too, attempting amid the broad comedy to both reclaim her mythologised protagonist and make some sharp political sideswipes. She meets with mixed success, raising cheers with Charles’s “down with austerity!”, yet pressing a little hard on her vital but overworked points about the representation of women both then and now. The self-aware theatricality can likewise overstate its case at times, though there’s something endearing about the show’s evident love for the art form, even in the very process of sending it up.

As played by the effervescent Gugu Mbatha-Raw, Nell is resolutely and joyfully human, recovering the woman from the legend. It’s her sharp wit that charms audience and court alike, while in her relationships she’s more than a match for leading man Charles Hart (Jay Taylor) and later David Sturzaker’s spirited monarch. She is, like the characters she begs an ineffectual John Dryden (Graham Butler) to write for her, a woman “with skin and heart and some sense in her head”. Three and a half centuries later, we could still do with more of those on our stages. 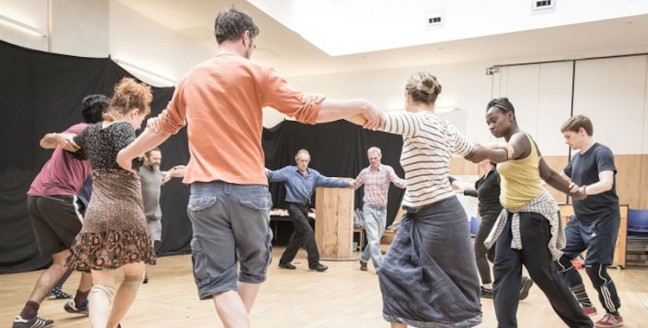 “I’m bad at being told what to do,” says Rory Mullarkey with a grin. The playwright, raised in a military family, quickly found that taking orders wasn’t for him when he tried to join the army as a teenager. A few years later, fresh from studying Russian at Cambridge University, a stint at drama school in St Petersburg was similarly short-lived. “My temperament just was not suited to being told what to do for a year.”

The same unruly streak runs through Mullarkey’s plays. Cannibals, the play that made him the youngest writer ever staged in the Royal Exchange Theatre’s main house at 25, contained a whole section written daringly in Russian. His Royal Court debut The Wolf from the Door playfully set violent insurrection in the green and pleasant land of rural England, while Pentabus commission Each Slow Dusk deliberately eschewed accepted First World War narratives.

Avoiding or subverting convention, Mullarkey says, has paid off. “I wrote stuff for a while and sent it off to places, but when people really started to take notice of it and put it on was when I’d abandoned all desire to do anything that was what I thought I was supposed to do.”

The acting might not have stuck, but Mullarkey’s fascination with Russia did. He reels off a long list of Russian authors – Dostoyevsky, Lermontov, Goncharov, Chekhov, Pushkin, Gogol – whose influence has seeped into his writing. “I read and re-read those guys until they were in my metabolism, because I loved what they said so much; not only their stories, but also the philosophical weight of the feelings they express.” Learning Russian as a teenager at Manchester Grammar School, he fell in love “with the sounds of it, with the way the words move”.

It was Mullarkey’s Russian that got him his first gig out of university. While performing in his own play on the Edinburgh Fringe, word of the show spread to director Lyndsey Turner – Mullarkey’s “number one living inspiration” – who asked to read the script.

Discovering that Mullarkey could speak Russian, she quickly set him to work on a series of translations for the Royal Court, offering a crucial foot in the door. It was also a steep learning curve.

“Going through 20 plays and every single line, seeing it in one language and making it work as an active line in English – it’s probably the best education I could have asked for in making sure the dialogue I was trying to write was going to be active,” he says.

The Edinburgh Fringe show that got Mullarkey noticed back in 2007 – “I wouldn’t be here if I hadn’t done that,” he insists – was directed by one Robert Icke. Now, eight years later, both men have found themselves tackling The Oresteia, Aeschylus’s epic trilogy of Greek tragedies – Icke for the Almeida Theatre, Mullarkey for Shakespeare’s Globe.

“I’ve always loved it as a thing because it’s huge and ambitious,” says Mullarkey of the play cycle, adding that “it feels like it’s got this huge, monolithic weight behind it.”

Mullarkey and Icke’s new takes on The Oresteia are just the crest of a huge wave of Ancient Greek drama on British stages. Another Oresteia is coming to Home in Manchester later this year, while the Almeida continues its Greeks season with Bakkhai and Medea, alongside a summer festival of related events. That’s not to mention another new version of Medea at the Gate Theatre, Greek myths for kids at the Unicorn Theatre, and National Theatre Wales’ epic multimedia retelling of The Iliad.

What is it about these ancient narratives that speaks to us so powerfully now? Mullarkey suggests that in an age of globalisation and inconceivably powerful market forces, “our world feels a lot more confusing and abstracted and we feel further away from the decisions which affect our lives”, an experience that Aeschylus’ trilogy timelessly captures.

“It takes all of those things – foreign policy, the economy, discussions about gender and politics as a whole– and boils them down to the thing that is ultimately the most tangible thing of all, which is blood.”

Greek tragedy also offers plenty of scope for reinvention. As Mullarkey puts it: “The texts are these extraordinary stories but ultimately they’re blank canvases for adaptation and production.”

He’s seen Icke’s radical reworking of The Oresteia – “It was like listening to someone else tell you a story you’ve heard before” – but his own adaptation opts for a different tack, focusing instead on the role of the chorus. Rather than worrying about fidelity, Mullarkey suggests that it’s about the theatrical journey of the trilogy.

“The Oresteia takes the audience through such an extraordinary cycle of events,” he says. “That’s what you’ve got to try and get from doing a production of it: you come out of it having been through something.” 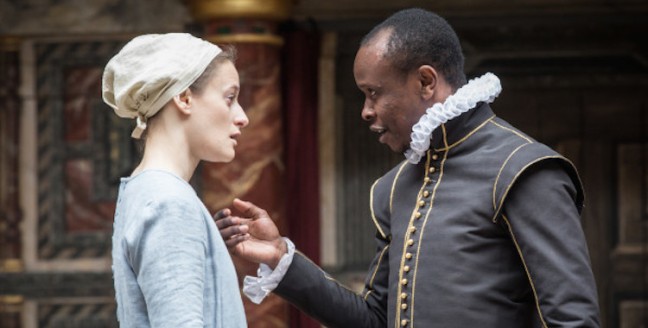 “Which is the wiser here?” asks Escalus, the Duke’s put-upon adviser in Measure for Measure. “Justice or Iniquity?” It’s a question that Shakespeare’s famously problematic play is constantly asking us. At its centre is a thorny moral dilemma, but often it’s the sinning and corrupt who seem to have the most fun. Is it better to uphold honour and ethics or to grab hold of life’s more earthly pleasures while we can? And in performance, where does the emphasis fall? On solemn debates about justice and morality, or on the lechery that the play’s authorities try and fail to stamp out?

For the most part, Dominic Dromgoole’s production takes the side of debauchery. Even before the play has begun, we’re immersed in a loud, bawdy version of Shakespeare’s Vienna, brimming with colour and sin. This is the liberal, licentious society that the Duke is about to take leave of, shirking the challenge of tightening the law’s reins. Instead, that’s the task of his unforgiving deputy Angelo, left in charge in the Duke’s absence. But Angelo’s crackdown is complicated when the pleas of nun-in-training Isabella, whose brother Claudio has been sentenced to death, are more persuasive than she intends. Faced with temptation, the question falls to Angelo: justice or iniquity?

As a debate on justice, mercy and hypocrisy, Measure for Measure is intellectually and rhetorically rich. To be more than a dramatised essay, though, it needs an injection of theatricality, which Dromgoole finds in Vienna’s less exalted citizens. There’s a delicious – if occasionally overstated – excess to the performances of Petra Massey as brothel owner Mistress Overdone and Brendan O’Hea as her unscrupulous client Lucio, who alongside Trevor Fox’s pragmatic pimp Pompey laugh their way around the newly harsh (and, in the case of Dean Nolan’s clowning constable Elbow, fumbling) law enforcement.

The plot’s creaky moments – the willingness of Mariana to leap into bed with the fiancé who jilted her; the convenient offstage death of a pirate who looks remarkably like Claudio – are likewise overcome with Blackadder-esque comic flourish, never pausing over inconsistencies. There are some darker shades, as women are dragged protesting from the streets between scenes, but on the whole this is a remarkably light Measure for Measure, not dwelling on the threats of death and damnation. The scales, the crucifix and the skull, gathered in small tableaux at the far end of Jonathan Fensom’s simple design, remain in the background.

But there’s nothing simple about the characters here. Angelo is no straightforwardly pompous, hypocritical Puritan, and Isabella is far from a saint. As the righteous man undone by desire, Kurt Egyiawan is hard to pin down. At first, his sudden lust for Isabella visibly overwhelms him, but the icy resolve shown in earlier scenes creeps back over him as he covers his tracks. As his unwitting tempter, Mariah Gale’s Isabella is earnest in her protection of her virtue, yet odd moments betray an underlying passion and pride.

And then there’s the Duke, a puppeteer with murky motivations for pulling the strings. It’s a puzzle of a role for any actor. Is this leader a would-be God, testing his subjects while he looks on, or simply a master manipulator out to get what he wants? Dominic Rowan plays him awkward and uncertain, making it up as he goes along, until in the convoluted final scene he steps back into the robes of power with a little too much relish.

There might be no revelation at the heart of Dromgoole’s interpretation, but this is a Measure for Measure that keeps its setting in mind. The Globe is about the groundlings, and this version of the play is about the people – flawed, passionate, pragmatic – who populate it. The problem posed by the play is never quite solved, but it certainly revels in the attempt.