The Diary of a Nobody 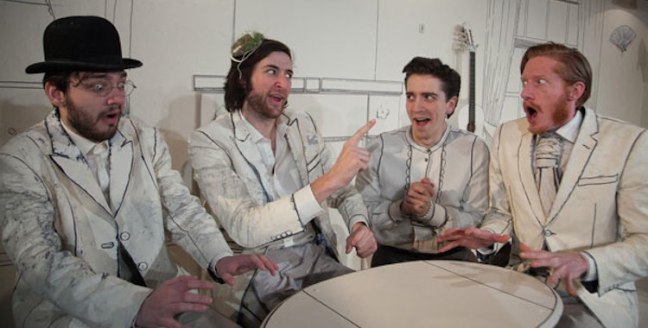 Hilarity is often found in the banal. How else do you explain the enduring popularity of observational comedy? We enjoy seeing unremarkable aspects of everyday life served up in surprising ways, happily feasting on our own foibles. Be it down to familiarity, reassurance or a fleeting sense of community through habit, the commonplace is a tried and tested route to the funny bone.

There’s a delicate balance, though. Make too mundane an observation and the joke falls flat. Push it too far, on the other hand, and it feels strained. Rough Haired Pointer’s adaptation of The Diary of a Nobody – its attention to the ordinary signalled right there in its title – is in danger of succumbing to the latter.

I admit I’ve not read George and Weddon Grossmith’s original comic serial, but fans seem to locate its humour in the small details of protagonist Charles Pooter’s very human flaws and misfortunes. In director Mary Franklin’s adaptation, these are all crammed into less than two hours, covering several months of the diarist’s humdrum life. Blind to his own pomposity, City clerk Pooter records each last trial and tribulation in his plodding journal, from his son’s irresponsibility to invariably disastrous social engagements. What should tickle is the routine and the minute.

In search of belly laughs over quiet chuckles, Rough Haired Pointer instead choose to inflate the small absurdities of Pooter’s day to day existence. Gently ironic humour takes a back seat to frenetic, non-stop slapstick and meta-theatrical japes. It’s not enough to giggle at Pooter’s self-important delight in another of his terrible puns; a laugh is seemingly not a laugh unless it’s amplified by someone simultaneously falling over a chair and addressing a member of the audience. It all smacks of trying just a bit too hard.

It’s a shame, as there are touches of real ingenuity buried somewhere beneath the relentless gags. Karina Nakaninsky’s design, adapted by Christopher Hone for this revival, is a (mostly) monochrome delight, nodding admiringly to Weedon Grossmith’s original illustrations. And when the action slows down for a moment, it finds time for genuine wit, most inventively in Franklin’s solution to several pages being ripped from Pooter’s diary. The ensemble play a tune while the lost months roll past on placards behind them, varying shades of leaves tumbling down gently on their heads.

Much of the time, though, this adaptation is so busy trying to be clever that it steamrollers its own intelligence. Quips race past before they have time to register; one laugh is still landing when the next follows fast behind, all progressively diminishing in both volume and enthusiasm as they pile up. The all-male cast of four do their best to maintain the pace, but it can’t help but be a bit breathless. This is theatre as treadmill: constantly running, never really getting anywhere.