The Various Lives of Infinite Nullity 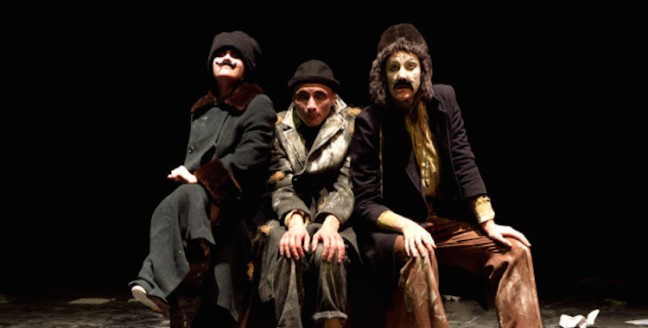 Clout Theatre are experts in the grotesque. In the first show of theirs that I saw, The Various Lives of Infinite Nullity, they took morbid curiosity into new territory, setting grisly murders and suicides on repeat. The company’s earlier show How a Man Crumbled, back as part of the Mimetic Festival, puts the emphasis on the absurd but with the same relish for the monstrous and distorted. Limbs are twisted into alien shapes; arms pop out from suitcases and lungs are torn from chests.

Clout Theatre’s starting point for their surreal grotesquerie on this occasion is Russian absurdist writer Daniil Kharms, who faced Soviet censorship in his lifetime and many of whose works remained unpublished until after his death. That perhaps accounts for the built in difficulties that surround Clout Theatre’s frenetic storytelling. Narrative is interrupted and confounded, the central story – Kharms’  ‘The Old Woman’ – becoming muddied or obscured. The writer loses control of his boisterous creation.

As in The Various Lives of Infinite Nullity, performers Sacha Plaige, Jennifer Swingler and George Ramsay adopt clown-like personas, though here they are more playful than sinister (but not without an edge of the latter). The bouffon-esque trio seem eager to entertain us and competitive in their attempts to alternately convey and derail the narrative at hand, whether that’s by telling swirling, nonsensical anecdotes or whacking one another over the head with vegetables. This performance style could quickly become wearing, and there are moments when it briefly grates, but Clout Theatre have enough charm and ingenuity to just about pull it off.

If these clowning interludes entertain with their wackiness, the narrative sequences themselves are strangely beautiful. The story of ‘The Old Woman’ – in which a writer finds his life disrupted by the mysterious figure of the title – is told through a DIY silent film aesthetic, fully exploiting the elastic expressivity of Clout Theatre’s performers. Ramsay in particular manages to access the full emotional range with just his impressively flexible facial muscles, while Plaige contorts herself into an extraordinary array of positions.

If theatre were solely about isolated stage images, Clout Theatre would be some of the best artists around. Startling snapshot follows startling snapshot. A creature formed of screwed-up paper stirs in the corner of a writer’s office; a recalcitrant corpse is frantically bundled into a suitcase; bodies wrestle and writhe; figures suddenly appear and disappear. Music also plays an integral role, with an inspired use of Shostakovich’s String Quartet No. 8.

But the same reservations that I had about The Various Lives of Infinite Nullityalso apply to How a Man Crumbled. Both shows are brilliant vehicles for the (clearly abundant) skills of their performers, yet I can’t fight the feeling that there’s something missing. The aesthetic is there, but the purpose and drive behind the succession of striking images is not quite apparent. Like the writer they show frustratedly scribbling on page after page, Clout Theatre seem to be grasping at something just out of reach.

Revisiting a production for a second viewing is always a slightly odd experience. The performance is strangely haunted, inevitably occupied by the lingering ghosts of that previous encounter. Each movement appears like an echo of its last enactment and each moment is stained with a dreamlike residue of familiarity. The performance is at once the same and different.

This metaphor of haunting is particularly apt for Clout Theatre’s new show, in which the dead do not pester the living so much as the living revisit the dead. The three figures who populate the piece are stranded in a sort of purgatorial state, stuck in a relentless cycle of living and dying; kicking the bucket in ever more ingenious and gruesome ways, in between which they are desperate to achieve the semblance of life. Elements of the lives they have left doggedly return to them – unfinished business that refuses to release its hold.

I first saw The Various Lives of Infinite Nullity on the Edinburgh Fringe this August, in the suitably atmospheric surroundings of Summerhall’s Demonstration Room. Watching the piece then, although able to admire the stunning images crafted by Clout Theatre, I struggled to fully engage with it. That might, admittedly, have had as much to do with the context of Edinburgh as with the show itself. Let’s not pretend that seeing four or five shows a day leaves a critic in the freshest state of mind when approaching new work.

Whatever the reasons, I took a lot more from The Various Lives of Infinite Nullity on this second viewing. Particularly with heavily visual work of this kind, it strikes me that you often almost need two chances to take it all in and process it effectively. There were elements that I missed, had half-forgotten or didn’t fully consider the first time around: the grey wash that repeatedly floods the stage, suggesting the surreal tedium of this existence; the shadowy, ghost-like movements visible behind the set’s plastic shroud; the importance of the childhood motifs that keep popping up.

This final strand was one that particularly struck me when watching the show at BAC. In this second encounter with the piece, the childlike behaviour that often characterises the performances suddenly seemed hugely, glaringly important to the whole thing. There are hints – in the items of school uniform, in the water guns spewing fake blood, in the gurning, exaggerated throes of death – of familiar playground games; playing dead, only here they aren’t playing at all. This recurring element also adds to the heightened and often hilarious tone of the show as a whole, which insistently draws out the ridiculousness of both life and death. It’s at once funny, tragic and grotesque.

Previously I had complained that the various striking scenes that make up The Various Lives of Infinite Nullity “feel like a string of stage images and little more”. Revisiting this opinion, I still feel that the piece is a little slight, but its images speak powerfully for themselves. Tea cups – ever-present symbols of banality – suddenly slice open throats; fake blood splatters against plastic; an innocuous skipping rope becomes a deadly weapon; a performer’s face is horrifyingly drenched in red liquid.

And then, perhaps, the most effective image of all: a woman lying on the floor, draped in plastic, her incessant, trivial chatter slowly muffled by a downfall of earth. Buried alive and still worrying about what to cook for dinner. Moments like this are when Clout Theatre are at their best, tapping into the essential absurdity of everyday existence and presenting it with a flourish of the surreal.