A clock is ticking in the Prozorov household. Minutes pass loudly, inexorably, mercilessly. When the hour noisily announces itself, each chime a dagger for the siblings who count the seconds of their self-imposed exile, the purgatorial tenor of the Southwark Playhouse’s new imagining of Three Sisters is made immediately clear. The century might have changed, but precious little else has. As Tusenbach would put it, “life is always life”.

Anya Reiss’ updating, which transplants the Prozorovs to the modern day, is more striking for its fidelity than its revision. All the outlines of Chekhov’s play are there; only some of the shades have been altered. The provincial Russian town of the original is swapped for a British Embassy in an unspecified Middle Eastern country, with queasy echoes of colonialism, while the semi-mythical escape of Moscow has been replaced by London. The modernising touches, meanwhile, are all feather light: a mobile phone here, a newspaper there. Reiss’ take on the play is even – more so than most versions – loyal to Chekhov’s often neglected comedy, tugging on some of the more absurd strands of its protagonists’ situation.

So how do you answer for the sisters’ immobility when they could just hop on a plane home tomorrow? Wisely, the barriers that Reiss and director Russell Bolam erect are all psychological rather than geographical, the greater ease of movement heightening the characters’ own deadening apathy. Irina’s cry of “I want to go home” at the end of the first half, delivered with wine glass in hand by Holliday Grainger, is more whining than despairing. Here, more than ever, the sisters’ own self-sabotage and navel gazing jump to the fore.

It helps that Three Sisters is one of those plays that offers new aspects to the view on each return visit. Even without a bold, bracing treatment, the play is constantly teasing out new emphases, different scenes or lines snagging on the mind each time. Placed in a modern context, it is the speeches about work that catch the ear, acquiring new resonances in a political landscape where the idea of hard work has become a tool for dividing those whom the system disadvantages. Class relations (and, as an added dimension, racial tensions) are also sharpened, with the largely invisible locals hovering like a ghostly presence at the edges of the production. As Olga, Masha and Irina blindly wallow in their own misery, you almost wish for a yell of “check your privilege”.

In Bolam’s straightforward but polished production, slight traces of the past cling to performances that are otherwise grounded in the here and now. Paul McGann’s quietly commanding Vershinin, voice dripping with authority, could almost be dropped into any era, his futile philosophising barely interrupted, as could Michael Garner’s mildly grumbling Chebutykin. The sisters, meanwhile, are largely as we expect them, even if they have acquired new gadgets. Emily Taaffe is the most impressive of the trio, as a painfully bored Masha who finds a violent release in her passion for Vershinin, while Olivia Hallinan as Olga and Holliday Grainger as Irina are suitably maternal and dreamy respectively.

But the shift of time and location, while working surprisingly well, seems at a loss for what it has to contribute to Chekhov’s existential questioning. The parallels are neat, but only occasionally illuminating. If the play’s timelessness is its point, then the historical context is almost irrelevant. For this reason, Three Sisters often works best when located in a sort of nowhereland, a setting with suggestions of both then and now. While Benedict Andrews’ striking production at the Young Vic effortlessly unmoored itself from time, the subtle yet insistent modernity of this version does not quite convince, in spite of all the elegance of its execution. The play might time travel with impressive ease in Reiss and Bolam’s hands, but the question that lingers underneath it all is why? 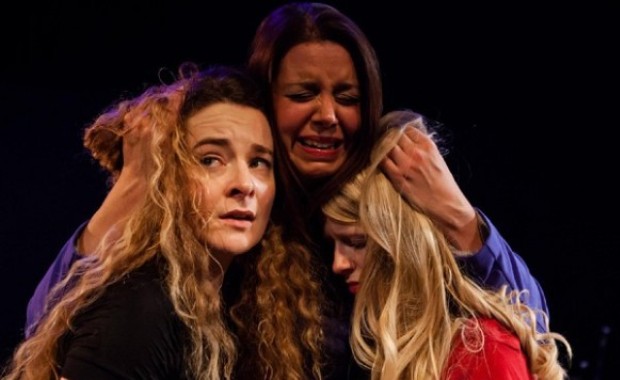 Putting to one side the rep system at venues like the National Theatre, which is more a question of scheduling than essential artistic structure, the idea of the repertory theatre company has all but evaporated from London’s theatre ecology. Which makes The Faction’s rep season at the New Diorama Theatre, its second annual season of this kind at the small theatre in Regent’s Place, both a rarity and an oddity. Interviewing the company last year, ahead of their first foray into the rep system that they hope will one day be their staple, they spoke of their desire to create “big, classical, epic theatre”, looking to the model of European ensemble theatres. Ambition is one quality they certainly don’t lack.

Despite The Faction’s aspiration to the “epic”, however, their work gains much of its power through its intimacy. In the black box studio of the New Diorama, where the company are currently presenting the trio of Three Sisters, Blood Wedding and the UK premiere of Schiller’s Fiesco, their muscular take on classic plays is gripping in its proximity. Just as last year’s heart-pumpingly visceral Mary Stuart ripped audible gasps from me as I sat mere metres away, the vibrations of their percussion-fuelled, passion-drenched Blood Wedding can be felt in the very bones. When the company are at their most thrilling, “big” is not one of the words that jumps to mind; instead it’s their attention to the small and their inventive use of the limited resources at their disposal that most impresses.

Thrilling as their work may sometimes be, there are gaps and falters in the company’s emerging aesthetic that become more evident in this second – and in some senses more ambitious – season. While previously the performers’ own bodies were their main material, with twisting limbs conjuring tempests and confining arms acting as unsettling prison bars, the addition of more external elements to their spare staging has produced mixed effects. The European influence makes itself more conspicuously if not always successfully felt, as animal masks take their ubiquitous but not entirely justified place inFiesco and the playing space forms the canvas for accumulating mess throughout Blood Wedding. Also, by widening the repertoire with their first attempts at Chekhov and Lorca, there is the nagging concern that the company’s desire for new challenges is slightly at the expense of the thematic intelligence that informed their previous triptych.

If one thread can be seen to run through the three plays that The Faction have chosen this time round, it might be identified as passion – both in its pulse-racing presence and deadening absence. In Fiesco, a society poised on the brink of rebellion rests on the personal passions of the eponymous duke, a fickle revolutionary leader for whom selfish desire and pursuit of pleasure are tangled up with political convictions. As realised in this version, that knot of personal and political motivations is reflected in an extension of Schiller’s musical metaphor for revolution, casting the euphoric crescendo of democratic triumph as just another form of self-gratification. Rhythm and dance pulse through the piece, harnessing sharply choreographed movement to evoke the frenzied late capitalist dance of hedonism at the gates of potential apocalypse. These resonant echoes cannot be an accident, reinforced by the use of masks depicting modern day leaders and despots alongside the crowd of blindly pleasure-seeking animals, although this metaphor feels at times stretched.

Looked at one way, the stranded siblings of Chekhov’s Three Sisters can be seen as embodying three equally destructive strains of passion. Masha’s is passion fierily, unsustainably realised; Olga’s is passion thwarted, left to wither under the weight of years and work; and Irina’s is passion tragically unfulfilled, an embryonic desire never given the opportunity of birth. This new translation by Ranjit Bolt comes at a tricky time theatrically, dogged by the recent memory of Benedict Andrews’ invigorating injection of vodka and anarchy into the same text, but while not quite chasing away that memory, it does manage to hold its own. Visually, it is spare but striking. The stage is dominated by chairs that are slowly shuffled into new positions between scenes, somehow implying both movement and stasis – progression of time, but not of change. By the end they are upturned, speaking of disarray and upheaval, yet it is significant that they remain. Lighting is also used simply but sensitively, with one particularly evocative shaft of light from offstage hinting at the distant, unreachable, almost mythical Moscow. The overall effect of the production is at once beautiful and banal, recalling Irina’s words: “if life is beautiful, why doesn’t it seem so?”

If passion can be uncovered in Fiesco and Three Sisters, half-concealed beneath a veil, then it streams in thick, hot rivulets from Blood Wedding. The company take the use of rhythm in Fiesco up by a few notches, weaving pounding percussion and haunting a capella song tightly into the braid of the performance. The pulsing musical heartbeat of the piece is matched by a vivid visual landscape, all scattered sand and red heat. The spreading grains of sand summon Lorca’s world of scorched land, thirsty for blood and tears, while at the same time being used as currency, highlighting the economic dimension of matrimony. The production also presents us with the startling image of the bride wrapped in ropes, a strange enactment of ritual that visualizes the forces that bind and tug her, forces she understandably struggles to free herself from.

As well as inviting thematic connections and reflections, the other immediately evident effect of experiencing the rep season as a whole is on the ensemble itself. With the same company of actors taking on roles in all three plays, comparisons are inevitably drawn and casting decisions are brought more to the fore than might otherwise be expected. It seems apt, for instance, that the compellingly melancholic Derval Mellett take on the roles of Masha in Three Sisters and the bride in Blood Wedding, each time paired with Jonny McPherson as her illicit lover, though elsewhere the choices feel less calculated. There is also something simply and inexplicably satisfying about watching an ensemble across three separate productions, an experience so unusual that it immediately tickles the interest.

The overall picture that is assembled from these three pieces is not quite a complete, persuasive argument for the ensemble rep model, but perhaps its incompleteness is an argument in itself. One of the most appealing aspects of this structure is the breathing room it gives to discovery, allowing a group of artists to work together as a group, rehearsing and performing in rep, learning and building from both continually and simultaneously. For this reason, and for the captivating moments of inventiveness that emerge from The Faction’s process of discovery, the rep model might have some life yet.