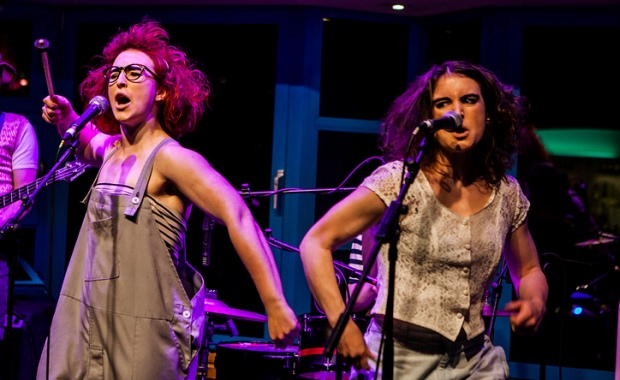 RashDash’s rock-infused cabaret restyling of Cinderella really shouldn’t be as good as it is. Reimaginings of fairytales are hardly original; almost every maligned fictional villain has now had the story retold from their misunderstood perspective. Likewise, there is nothing particularly earth-shattering about RashDash’s scruffy-punk aesthetic or the music of accompanying band Not Now Bernard. So the gloriously anarchic product, transcending its angsty teenage premise, is fairly remarkable testament to the charisma and chemistry of this accomplished performing duo.

The narrative twist that is executed by RashDash throws the Cinderella story into the midst of rabid, fame-obsessed contemporary culture and the distorted world of “reality” television. Dragged up in a world of burned out cars and used needles, twins Emerald and Pearl undergo their own rags to riches transformation when their fortunes are changed by their mother’s marriage to a wealthy single father, but this is no fairytale. As they find themselves increasingly overshadowed by seemingly perfect Arabella – dubbed “Cindy-rella” by Emerald – the girls decide to copy their stepsister by entering You Shall Go to the Ball, a nauseatingly plausible television contest to win the affection of a prince.

But it’s not the gruesome dissection of reality TV that really slices to the bone – we already know that The X Factor is an amplified freak show, the grim voyeurism of the eighteenth-century asylum made-over by the worst excesses of Saturday night entertainment. Instead it is RashDash’s cuttingly perceptive indictment of the roles that women are straitjacketed into by this media-obsessed society that remains most firmly embedded in the mind. In an attempt to match the appeal of materialist, manicured Arabella (ironically represented by a male band member wearing a tiara), the two sisters wriggle into boob tubes and totter on platform heels, pouting with hands on hips in a pose that exemplifies the anxiously conformist vanity of the Facebook profile picture – hilarious but grotesque.

There is also something fairly potent in RashDash’s approach about the nature of narrative and the power held by the storytellers. With the media under a particularly scorching spotlight at present, their turning of the tables is yet another instance of how our perceptions are determined by those clutching the pen – the implication being, of course, that it has always been this way. While such distortions now lie in the hands of profit-conscious TV producers and tabloid editors, the continued currency of fairytales illustrates that there has always been a tendency to paint heroes and villains.

Such musings, however, arose mostly after the event. The show itself carries its audience along on a momentum of charismatic, impressively physical performances and fierce vocals; a sharp and irresistible adrenalin rush of playful, cabaret-style narrative riffing that races past at a furious gallop. The intensely performative confessional of the cabaret show is an appropriate vehicle for telling Emerald and Pearl’s side of the story, but this genre is spliced with other elements. The use of foot pedal looping to create a layered musical narrative, for example, offers one of the performance’s stand-out moments of inventiveness, suggesting the noise of the various voices surrounding this story. RashDash also throw in some cheeky chunks of meta, making knowing nods to the theatrical conventions they are working within and teasing us with the prospect of intimidating audience interaction that often accompanies such performances, without ever fully committing to this strand.

Ultimately, it is perplexingly hard to articulate just why this works. There may not be a great degree of originality or distinctiveness to RashDash’s approach, but in execution it is unfailingly enjoyable. Like the fairytale it takes as its basis, it may be familiar and not all that exciting on paper, but it translates into an undeniably engaging night of entertainment.