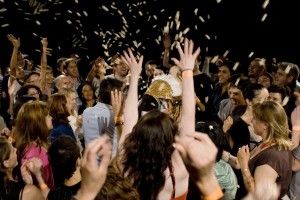 Not long into our interview, Jorge Lopes Ramos, co-creator of ambitious overnight theatre experience Hotel Medea, is at pains to stress the collaborative aspect of the durational piece he has helped to coordinate. “This is not my work,” he says firmly, “but ours”. He is referring specifically to his fellow director Persis-Jade Maravala, who is unable to join our chat, but he might as well also be speaking more widely about everyone involved in each performance, right down to the last audience member. Because if one thing is vital to this extraordinary night of theatre, it is the collaboration of its audience.

It was not initially clear, however, whether such an audience would even exist. “This is not – no pun intended – an overnight success,” Ramos insists. Despite emerging from its premiere at Edinburgh as a much discussed hit, it took a lengthy development process to translate Hotel Medea from a bold embryonic idea to a finished six-hour show. At first, Ramos explains, it met with a lot of scepticism and reluctance from industry programmers, mainly because of the sheer impractical audacity of staging a production between midnight and dawn. As a result, Hotel Medea became a self-proclaimed “act of resistance”, a stubborn placing of trust in the belief that audience members would want to take this theatrical endurance test.

“If you ask anyone who has seen the show, the fact that it’s six hours long never crosses their mind,” Ramos claims in response to my suggestion that keeping audiences engaged during the night must be a struggle. The length certainly seems not to have put off the many theatregoers who have happily jumped into their pyjamas for a night at Hotel Medea during its numerous runs, the latest of which takes place at the South Bank Centre this summer. In the minds of its creators, Ramos tells me, the experience is one connected with the unique quality of night time rather than with the number of hours it lasts. “Whether it’s four or six or eight hours long makes very little difference, because the engagement is with midnight and daybreak, so however long that is, you’re moving towards dawn.” It creates, as much theatre does, a fluid relationship with time.

Ramos does admit, however, that a fair amount of thought has had to go into sustaining the energy of audience members throughout the performance. “The whole dramaturgy of the event, which we call dramaturgy of participation, is centred on how a person reacts or engages with events at every time of the night,” he explains. Through a rigorous process of audience research, Hotel Medea is meticulously crafted to keep its audience actively and passively engaged at the right moments, judging when to recruit them in role play and when to give them a breather. Even more ingeniously, this structure of participation and rest has been carefully woven into the narrative of the myth that is being told.

So why this myth? Before answering my question, Ramos is quick to emphasise that this is not an adaptation of Euripides’ text – “we’re dealing with a myth, not a version of a myth”. Of all the Greek myths handed down to us, the tale of Medea’s betrayal and bloody revenge courts possibly the most enduring fascination, becoming the subject of recurring artistic interpretations. Ramos thinks that it’s all to do with the shock factor. “In other Greek myths, because of the time context, you almost need to redesign the taboo for today. With Medea you don’t; it’s still as fresh and as full of impact.”

But impact is not the only reason for selecting this particular myth. It also just so happens that all of Medea’s revenge against philandering Jason is wreaked overnight, rendering it the perfect story to tell in this nocturnal environment. As Ramos goes on to elaborate, the inexorable approach of the dawn holds equal significance for their presentation of the myth. “The arrival of the sun is symbolic,” he says. “The sun god is Medea’s grandfather, who has given Medea’s father the golden fleece as a birth present, which is what attracts Jason to invade Medea’s land in the first place.”

Hotel Medea’s attention-grabbing staging might have the slight whiff of a gimmick, but speaking to Ramos, I sense that these elements ultimately serve the show they are trying to create rather than the other way round. The same goes for the production’s use of audience participation. Immersive and interactive theatre are undeniably in vogue at present, which can hardly be doing Hotel Medea any harm, but it is a fashion that Ramos has little patience for. “It’s inevitable that you get branded and categorised with companies whose work people find, in a superficial way, similar to what you do,” he concedes, before frankly stating that he does not enjoy much of the work that typically falls into this camp.

“The point of immersivity for us was as a direct answer to the question of how we look after an audience overnight,” Ramos continues, seeing their interpretation of immersive theatre as intimately tied up with the unique demands of the piece they have created. “I dislike work that brands itself immersive,” he says, “because it tends to rely on that category to have an impact and a relevance.” Instead, Ramos and Maravala are interested above all in theatre that puts the individual experience of the audience member at its centre.

“I just like to be looked after,” Ramos says simply. “It doesn’t matter if it’s an opera, a musical, a highly participatory event – I just want to know that someone actually thought about me.” He and Maravala have applied this mantra to Hotel Medea, with the aim of putting their audience at ease and considering the individual experience of each theatregoer. This is partly achieved through the rather novel idea of an “audience training camp”, where tentative audience members are supportively put through their participatory paces before the show proper, the theory being that they then approach the performance with a more relaxed attitude.

But even without this, the very format of the show immediately nurtures a different relationship between performers and audience. Before arriving at the venue, theatregoers have made the conscious decision to lose a night’s sleep, to go on an overnight journey with a group of strangers. As Ramos puts it, “we already have an implied contract of trust”. This implicit contract is essentially what has driven the development of the show, prompting ways to first of all attract that audience and then to encourage those theatregoers into participation.

It seems to be working. Not only has Hotel Medea found its audience, it has taken its hand and led it through the early hours, allowing it to claim some ownership over the resulting creation. As Ramos makes clear, this new engagement with the audience is the desired culmination of six years of collaboration and hard work and of six sleepless hours. The ultimate hope is that, in Ramos’ words, “we are able to go quite far together”.