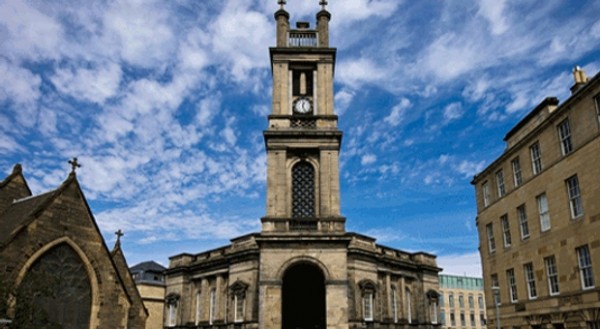 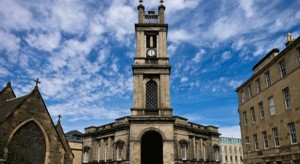 There is professional fervour for the Edinburgh Fringe, as an international platform on which to present new work, and then there is pure, unfettered love for the festival in all its chaos. Erica Whyman, the artistic director at the helm of Northern Stage’s ambitious Fringe programme at St Stephen’s this year, falls firmly into the latter camp.

“I just love the energy of it,” she tells me over a snatched lunchtime phone call. Unsurprisingly, Whyman – who has also just been announced as the Royal Shakespeare Company’s first deputy artistic director – is a very busy woman at the moment. Northern Stage’s pilot project at St Stephen’s is due to take sixteen separate productions up to Edinburgh, where the venue is providing accommodation for all performers involved, not to mention converting the atmospheric church into a performance space. It is a massive undertaking.

“If you’re going to arrive in Edinburgh, you need to arrive with a bit of a bang,” says Whyman by way of explanation. Her initial intention was to test this collaborative model with just three productions, but the project rapidly snowballed into a full season of work over the month of the festival. The idea was born out of Whyman’s love for Edinburgh, an existing relationship with St Stephen’s, and the feeling that artists in the North needed an affordable platform to present their work to Edinburgh’s international audience.

There was also a funding incentive. “In 2011, when we were applying for Arts Council funding for Northern Stage, I was conscious that it was important to try and demonstrate a growing relationship across the region,” Whyman explains. “It struck us that we could kill two birds with one stone. We thought that there was a lot of interesting contemporary work coming out of the North and that if we bundled that together into one venue we could have a really striking programme.”

The various pieces compiled by Whyman for the festival appear, at least at first glance, to have little in common other than geographical location. They range from RashDash’s bold cabaret transformation of Cinderella to the gentle, biscuit-fuelled audience participation of Faye Draper’s Tea is an Evening Meal. Asked about the programming, which she characterises as one of the easiest components of the whole process, Whyman admits that she did not grasp at any unifying thread or theme.

“It wasn’t terribly …” Whyman trails off, chewing over her words, before continuing: “I was going to say conscious, but that’s not quite true. We didn’t set out to find a particular kind of work.” One characteristic that the productions do share, however, is a direct relationship with their audiences, which Whyman explains was intentional. She hopes that these choices will have the power to surprise theatregoers and to subvert any clichés that exist about Northern theatre, breaking away from the stereotype of gritty kitchen-sink realism to embrace more contemporary, internationally minded work. Instead of being concerned exclusively with the region they originate from, many of the works, like Third Angel’s What I Heard About the World, exhibit “an outward-looking curiosity”.

If the programming has been relatively straightforward, the logistical challenges of transporting sixteen productions to the Fringe are proving more demanding. Northern Stage has booked a total of 59 bedrooms for its artists across the festival and is creating two performance spaces and a café within the environs of St Stephen’s – and that’s without even factoring in the coordination of marketing and press, the organisation and training of volunteers, the feat of teching sixteen separate shows. As Whyman laughs grimly, “there are a lot of spreadsheets”.

This nightmare of organisation responds, however, to what Whyman feels is a deep need within the region. Ultimately, this is a venture driven by artists. “We did a lot of listening and asking artists what made Edinburgh valuable for them,” Whyman tells me. The response was overwhelming in its enthusiasm for the artistic opportunities offered by the festival, but the associated costs, particularly of accommodation, emerged as a major barrier, even for more established companies. To lower this barrier, Northern Stage is taking on many of those costs through a collective, collaborative approach. In Whyman’s words, “this model has just shifted the balance”, spreading the load to make the festival more affordable.

Is this an approach that other venues and artists might adopt in order to take work to Edinburgh? Whyman’s answer is careful. “It’s up to every project and every region to work out what’s best for their artists,” she says, acknowledging that this is not a realistic or desirable model for everyone. She goes on to explain that “there’s a kind of logic” to the project that Northern Stage has mounted: “In the case of the North, we happen to be a venue that already presents, develops and co-produces a great deal on a small scale, which isn’t true of everybody.” Conversations sparked by the St Stephen’s season have, however, revealed an interest in other parts of the UK, raising the possibility that we may see more regional or venue-based programming at Edinburgh in future years.

Such conversations tap into a growing obsession with collaboration, a preoccupation born from the difficulties imposed by recent and forthcoming cuts to Arts Council funding. Not only is Northern Stage participating in its own collaborative activity by bringing together artists from across the North at St Stephen’s; the theatre will also be harnessing these discussions during the festival at Stronger Together, a day of debate and provocations about collaboration in the arts. Following last year’s symposium at Northern Stage’s Newcastle home, Edinburgh would appear to be the perfect forum in which to throw these discussions even wider.

This year’s conversation, I am told, will differ from 2011 in more than just location. “Unlike last year, when we were all still reeling from the funding decisions, good or bad, this year it feels like there’s a need to talk differently about collaboration and to make sure that we are in charge of it in this sector,” says Whyman. Collaboration has become such a ubiquitous buzz word in the arts that it is vital for platforms such as this to take a step back and interrogate it. “We’re posing the question that day: can collaboration change the game, and if so what game do we want it to change?”

The day will feature speakers such as David Jubb, Vicky Featherstone, Chris Thorpe and Lucy Ellinson, as well as a case study from Globe to Globe organiser Tom Bird, offering an international lens on what collaboration can mean on a large scale. The format partly borrows from the Open Space Technology that has become synonymous with Devoted & Disgruntled, allowing attendees to put forward topics for discussion and weave freely in and out of different conversations.

Whyman explains that the day is less about the collaboration that Northern Stage has forged and more about how all artists can collaborate better – as well as when they should avoid collaboration altogether. One intriguing contribution is to come from Andy Field, who will discuss the experiences of Forest Fringe since losing their Edinburgh venue, exploring “the idea that you might move the conversation forward more effectively by resisting and by not necessarily doing what people expect you to do”. It is a provocative challenge to the popular feeling that collaboration is always positive.

Doing the unexpected and confronting new challenges brings us back to Northern Stage’s own ambitious model of collaboration. Only through execution will it be made clear whether such a model can work, but this is undoubtedly a bold move from Northern Stage and one that could mark a shift in the way in which artists approach Edinburgh in future years. Vitally, Whyman’s approach to collaboration is one that is not only asking “how can we do it better?” but also “how can we resist if necessary?”