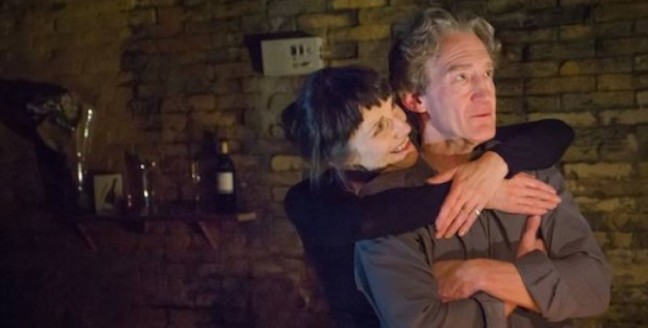 Clara Brennan seems to have a direct line to an audience’s tear-ducts. The playwright’s last offering, the doubly devastating Spine, left barely a dry eye during its soggy, sniffly Edinburgh run. Boa, which is similarly small-scale but wide-ranging, also produces its fair share of tear-stained cheeks by the end. At one point during the performance I see, there’s an audible gulping back of tears; the evening’s customary applause is followed by the no less appreciative rustling of tissue packets.

But where Spine effortlessly intertwined the personal and the political, dragging up sobs with both its ideas and its characters, Boa shows the strain of trying to replicate that feat. Again, there’s a relationship at its heart, though this time it’s a romantic one. Harriet Walter, all black-clad sophistication and brittle emotion, is the Boa of the title. Or rather, that’s her nickname, a childish contraction that stuck. Sometimes like the feather variety, at others more of a constrictor, she clings passionately to Guy Paul’s wry, brooding Louis as their lives are catapulted through the last few decades of world history. Love and marriage play out against a backdrop of war and devastation.

The story of the couple’s life together is told in economical but contrived reminiscences, flashing backwards and forwards through years of infatuation, excitement, anger, regret, depression, reconciliation, contentment, grief … Both Boa and Louis pursue livings that push them to extremes: the former as a dancer, contorting her body into constant, punishing pain, and the latter as a war correspondent in the ravaged south-east Asia of the latter quarter of the 20th century. Boa loses her faith in her body; Louis loses his in humanity.

The couple’s dissection of their shared history, placed in a present day context that remains indeterminate until the final moments, verges on the masochistic. Both are determined to isolate where things went wrong – in their relationship, in their careers, in the world – at the same time as reluctantly acknowledging that “you can’t fix the past”. But still they rake it over and over, stirring up old soil until you want to shake them and tell them to stop. Leave it alone.

The point is that they can’t. Hannah Price’s simple, intimate production captures something of the frenetic movement of these memories, snapping the action back and forth through time with the absolute minimum of fuss. Eventually, the two seem to bleed into one another, the past leaving its indelible stain on the present. We see this too in Walter and Paul, whose gorgeously layered performances feel shadowed in each individual moment by the characters’ past and future selves.

In an attempt to stop this obsessive scab-picking from getting too painfully introspective, Boa also casts its gaze outwards. The world intrudes both through Louis’ work, forever offstage and unseen but leaving its bloody mark nonetheless, and in Boa’s guilty, complicated preoccupation with the lives of those less fortunate. “I’m drawn to people’s suffering,” she admits, “it makes me feel.”

The handling of this confrontation of privilege and deprivation could be whereBoa gets more interesting, in the way Spine did with its angry yet unforced engagement with contemporary politics, but instead it turns out to be something of a missed opportunity. Boa and Louis are a walking parade of first world problems and they know it. Boa laughs at herself – and we laugh knowingly along with her – when she compares her rage at poverty and injustice with her no less forceful anger upon cutting into an over-ripe avocado, but Brennan rarely digs deeper than this sort of familiar and ineffectual middle-class guilt.

More convincing than the play’s nods to the wider world are the multiple ways in which its two protagonists fall apart and clumsily put each other back together again. “We’re all lovely fucking fuck-ups,” says Boa at one point, a bitter laugh on her lips. Between them, the haunted, hard-drinking couple offer plentiful proof of this over the years, but still they keep returning inexorably to each other’s arms, finding both retreat and redemption in one another. And what better reimagining of the old “warts and all” than the line “I love the piss and shit of you”? This is love not in spite of but because of every flaw, every ugliness, every mistake. That sentiment, if nothing else, can begin to make the eyes prickle. Because aren’t we all just lovely fucking fuck-ups?