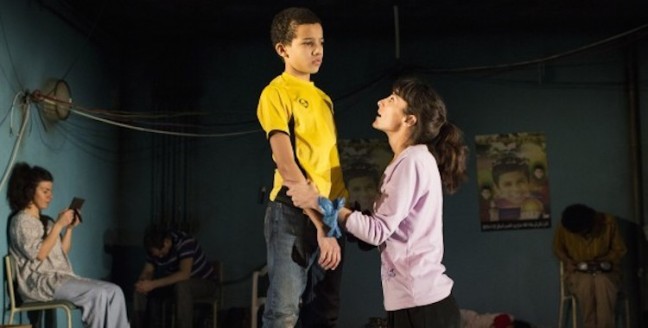 Fireworks is an exercise in dislocation. From its first, flashbulb bursts of light, we are shoved slightly off-kilter. With deft simplicity, Dalia Taha’s play and Richard Twyman’s production wrench us into the fear and uncertainty of war-ravaged Palestine, a suspended present moment in which nothing can be relied upon. Violence shades into playground games and make-believe shimmers with menace.

At the same time, we are always set at one remove. We can never forget that we are, after all, just watching, choosing to spend an interval of our privileged lives in this simulated state of precariousness. We can see the clearly demarcated outlines of Lizzie Clachan’s self-contained bunker of a set, a picture frame opening out onto another world. It might as well be the firework display that its title references; an explosive diversion, one that may leave us rattled but that we can walk away from nonetheless.

This closeness and distance, this sense that we walk in the characters’ shoes but can throw them off at any point, is crucial to how Fireworks functions. We need to be there, with the action, but at the same time always uncomfortably aware of the huge chasm that safely separates us from what is being depicted. We can be transported, but only temporarily, conscious all the while that our shaken responses cannot possibly be enough.

Almost everything happens in the deserted apartment building so vividly represented by Clachan’s design: all exposed pipes and wires, corners cluttered with the detritus of living. The side-by-side existence of two families, eschewing the questionable safety of public shelters for the claustrophobic refuge of home, is here compressed into one space, their lives overlapping and interweaving in the single, dingy room.

Taha’s play is anchored by the two children at its centre, both teetering on the brink of adulthood at the same time as staring down death on a daily basis. The familiar contours of childhood are mapped onto violent, shifting terrain. Like so many other youngsters, Khalil and Lubna play at being soldiers, but their games are unnervingly close to home, throwing back sharp reflections of the conflict they are surrounded by. Khalil’s favourite is the checkpoint game, one played out with chilling brutality.

Adults play too. Khalil’s mother attempts to coax him into childish fantasies, desperate to preserve their brittle shared innocence. The two women find fleeting respite in a game of skipping. Lubna’s father tells her that the rockets lighting up the horizon are just fireworks, a fiction that he seems to take more comfort from than his solemn, perceptive daughter does. Roles are reversed.

Through these playful coping mechanisms and loving deceptions, the lines between reality and fiction become increasingly blurred. Dreams, too, acquire unusual importance, representing a world beyond everyday reality – be that in the afterlife or up among the clouds. With the wall dividing the living from the dead so perilously thin, Taha vividly captures the importance of believing in an existence beyond the final bomb blast or hail of bullets; those lost in the conflict are always martyred, never killed.

If it all sounds a little amorphous, that’s because it is. There is little shape to Taha’s play, which instead lurches from one scene to the next. Given the circumstances, however, it feels utterly apt. The impression created – by everything from the restless performances to Natasha Chivers’ flickering lights – is of delicate moments carved out of an extended, indefinite zone of uncertainty. In the knowledge that everything could come crashing down at any moment, these small exchanges, these little sparks of connection, take on painful, nerve-shattering significance.