The dad of one of my best friends is a long-time Labour Party member. He’s supported the party for all his adult life and since retiring he’s started getting more involved in local politics. When we were talking about the Labour leadership election, this friend of mine made it clear that her dad wasn’t backing Jeremy Corbyn. I was. So when the vote was announced, she immediately messaged me: “are you happy with the result?”

And I realised, with a little jolt of surprise, that I wasn’t quite sure how to reply.

Hope can be an oddly scary thing. I am, for the most part, a pretty optimistic person. Sure, the world can seem depressingly fucked up a depressingly large amount of the time, but acknowledging that has never stopped me from finding wonderful, beautiful, hopeful things to restore my faith in it. Seeing positives and believing in the possibility of something better, though, is a very different thing from investing hope in a solid person or party or promise. The moment you do that – the moment you shove all your optimism on the shoulders of a Jeremy Corbyn or a Natalie Bennett – you’re opening yourself up to the all-too-likely possibility of disappointment.

Tribute Acts is all about hope, heroes and the heartbreak of being let down. TheatreState’s new show has a fantastic central premise: Cheryl Gallacher and Tess Seddon use their shared disappointment in their once heroic dads as a parallel for the disheartening trajectory of the left. Sam Gallacher and Rodger Seddon, like Tony Blair and Bill Clinton, are men in suits who seem to have all the answers. Cheryl and Tess want to believe in them. They used to believe in them. But betrayal by father figures, whether biological or political, is hard to bounce back from.

On stage, Cheryl and Tess’s dads join them as projected presences, speaking from screens over their shoulders. Each performer has interviewed the other’s father, asking questions about political beliefs and family memories. The two men on screen smile and hesitate, awkward and unsure of what is being asked of them. They tell dad jokes. They struggle to recover memories that are cherished by their daughters. They stick firm to their principles – both are lifelong socialists – but are tellingly unable to locate women in their visions of the future. Asked who they’d want as advisers if they became prime minister, both name a string of men.

We’re invited, then, into the same process of disappointment that has tainted Cheryl and Tess’s relationships with their dads. Gradually, behind the suits and the smiles, we see the repeated failures and the broken promises. Both men left their families, and so the spectres of divorce and adultery still haunt these father-daughter relationships. Even without the experience of a broken family, though, the countless small letdowns that accompany the realisation that your parents are just people, after all – flawed, fallible people – is wrenching. Cheryl and Tess’s performance style riffs on shared silliness and the playful dynamic they have as a duo, yet within that there are startlingly poignant moments.

But what resonates just as much – perhaps more, as I process my ambivalence about Corbyn’s leadership – is the hurt of broken political promises. They might fuck you up, your mum and dad, but so do the false hopes and empty promises of slick, suit-clad politicians. I’m the same generation as Cheryl and Tess. I also remember the heady rush of Tony Blair’s landslide election and the now painfully ironic hubris of the campaign’s blasts of D:ream’s ubiquitous “Things Can Only Get Better”. As a child, not understanding the politics or what the “new” bit of New Labour might mean (everything’s new when you’re seven), that song and the excitement that accompanied the 1997 election had the flavour of prophecy. Things could only get better, surely. (*cue bitter laugh*)

Intertwining those two strands of betrayal – personal and political – is a brilliant idea. First disappointments are always the harshest, and so the slow, painful process of losing faith in parents is a compelling analogy for losing faith in the left. In practice, though, the two halves of the show don’t ever fully knit together. As Cheryl and Tess speak into their microphones about the promises of men in suits with footage of Blair rolling behind them, it’s clear what TheatreState are doing, but this basic conceit isn’t really advanced at all over the course of the show. Instead, the two performers’ family relationships begin to dominate, taking us further and further into the personal while the political lingers like a half-forgotten shadow.

Tribute Acts opens with a reference to one of the iconically naff moments in 90s cinema: Bruce Willis saying his hero’s goodbye to daughter Liv Tyler in the fantastically bad disaster blockbuster Armageddon. As snippets from the movie flicker on screen, Cheryl and Tess enter in ridiculous, billowing space suits (see what I mean about the silliness?), heroes in their own way about to step into the unknown. This daft framing device – nodded to again when both performers don copies of Liv Tyler’s dress – is, oddly, one of the show’s most powerful tactics. It captures, with a distancing dose of hyperbole, what we so often want from parents and leaders alike: someone who will step in and save the day (and possibly, like Bruce Willis, the whole world). Away from Hollywood, though, it’s never quite that easy. 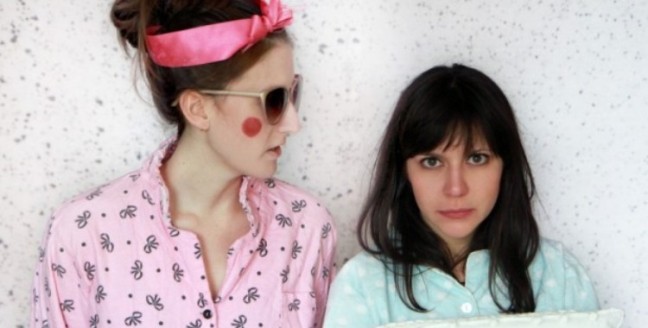 Behind even the most misguided shows, there is usually the nugget – however small – of a good idea. When I first saw The Fanny Hill Project in Edinburgh last year, the good idea at its heart was obscured by the messy, distracted production created around it. TheatreState had paired John Cleland’s erotic novel with the contemporary tale of co-director Tess Seddon’s experience as a model in a foot fetish club in New York, and from there departed into a sprawling exploration of women’s representation in the 21st century. As I wrote in my review at the time, “A feminist piece about modern representations of women is not short of targets, which is perhaps where TheatreState’s fierce but confused satire falls down”. The show had bags of ambition, but precious little focus.

The Fanny Hill Project v2.0, as TheatreState have cheekily christened it, is an impressive transformation, excavating the central idea of the original piece and making it into the show it always had the potential to be. Other than retaining its core concept, the show is unrecognisable, adopting an entirely new structure. Whereas the initial production was all over the place, its madcap scenes loosely strung together, here it has been honed down to its essentials and marshalled into a tight, effective framework. Shedding all the accessories that got in its way first time round, the show is now completely built around its twin narratives of two women – one 18th-century, one 21st-century – who end up selling their bodies.

This structure also allows Seddon and fellow performer and director Cheryl Gallacher to return to the spotlight, whereas previously they were hidden in the background or absent entirely. It’s a wise choice, as the pair have a compelling dynamic and an effortles way of inviting in their audience. In a fun little preamble, they coax us all into playing “I have never”, most beloved drinking game of eager-to-impress students. This quickly becomes a way of introducing Seddon’s shady past, which in this version – unlike before – she takes full ownership of. When Seddon first revealed this secret, she explains, Gallacher was desperate to make a show about it; in return, Seddon dug up Cleland’s novel and presented Gallacher with the challenge of Fanny Hill. There’s eye-rolling reluctance from both parties.

So the two women, Seddon as herself and Gallacher as Fanny, do battle in their attempts to tell their stories, while Jordan Eaton observes proceedings from behind a DJ booth at the back of the stage. Each chapter, linking together events in the lives of the two protagonists, is announced into the microphone by Eaton, wrenching away narrative control from the very people whose narratives are at stake. The quickfire sections are separated by a bell – ding! – with more than a hint of the boxing ring. Women here are repeatedly interrupted and sidetracked in the authoring of their lives, competitively pitted against one another while the audience problematically look on.

Performance is key. Thanks to the knowing structure and the winking self-awareness, we are constantly reminded that this – like the outfits the performers switch between – is all put on. When Seddon and Gallacher throw shapes to David Bowie’s “Let’s Dance”, their moves fiercely mock the “sexy” tropes of contemporary music videos; the artificiality of pillow fight fantasies is gleefully pointed up by the use of a fan to scatter feathers into the air around the two giggling performers. And we begin to wonder whether “Tess” and “Cheryl” – the versions of themselves that the performers present on stage – are also carefully constructed performances. Is the appealing kookiness that they adopt just another role that women are expected to fulfil? (my Manic Pixie Dream Girl alarm starts to go off)

The Fanny Hill Project v2.0 still leaves questions unanswered, but now in a way that feels apt and intentional. The closing scene, rather than departing in bewilderment, leaves a powerfully bitter taste in the mouth. What if, TheatreState suggest, the only way of getting one’s voice heard as a woman in a casually misogynistic culture is to conform to the image that culture insidiously projects? If you can’t beat ’em, join ’em. It’s a troubling thought, and one that hangs in the air long after the feathers have fallen to the ground. 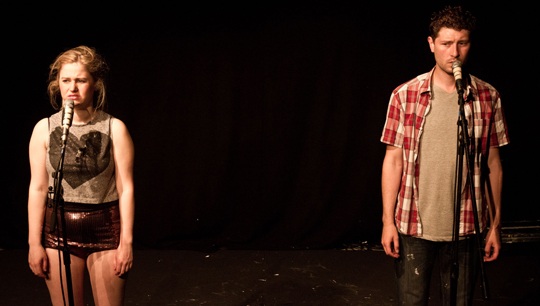 Same people, same bars, same drinks. Or so we’re told by Joe and Kirsty, both out on a Friday night and each with their own reasons to seek oblivion. Through these two characters, Luke Barnes’ viciously funny and quietly devastating two-hander sketches out a searing, booze-stained portrait of the Pro-Plus generation, grabbing at their next energy kick while putting off tomorrow.

In a culture that seems determined to paint its youth as violent rioters and benefit-sponging lost causes, Barnes and his characters are paradoxically both embodying and kicking out against those stereotypes. There are shots, kebabs and smashed glass, but there are also concealed depths peeking through the fake-tan facades. Kirsty, it transpires, has ambitions to go to university and would rather go on holiday to Paris than to Kavos; Joe remains unemployed not through a desire to dodge work, but due to a dread of wasting his life in a soulless office.

Such fragments of personality are revealed through overlapping monologues spoken into microphones at opposite sides of the stage, an initially static set-up by director Cheryl Gallacher that gradually unravels into a frenetic reflection of the characters’ escalating intoxication. Performers Cary Crankson and Ria Zmitrowicz weave and stumble around the small space, making convincing and disarming drunks, yet tempering the humour with a poignant strain of vulnerability. The laughs, of which there are many, have a habit of souring in the mouth.

It is a piece that feels very much of the now, offering grim reality but few solutions. Barnes’ lyrical yet gritty language crystallises the brief euphoria and crashing despair of a whole swathe of young people emerging into a world that seems not to want them, with references to useless master’s degrees and the lie of an Olympic “legacy” that delivers very little opportunity. In a telling touch, we are told that the local church has been converted into a bar – home of the new religion. As Joe and Kirsty argue, with the way things are, you “might as well just get fucked”.