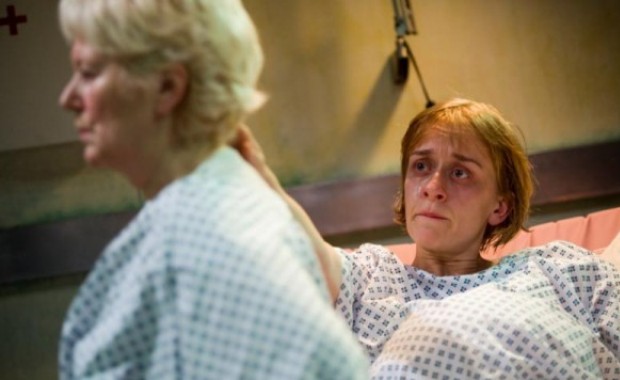 The king is dead, Troy is burning and the “crème de la femme” of the city are imprisoned in the maternity ward of the hospital, awaiting their fate amid teddy bears and pill bottles. The chorus screams while the gods cackle through mounted television monitors, peering down at the anguished humans with hand-rubbing glee. The Gate Theatre’s bold, visceral new realisation of the fall of Troy and the long tumble from grace to which its female inhabitants are subjected is certainly not a tragedy given to moderation.

Caroline Bird’s thrilling, muscular adaptation of Euripides is, as Poseidon sneers down from his distant Olympus, “an artistic impression” of Troy – a contemporary riff on tales indelibly impressed on the collective cultural memory. This allows for an implicit critique of the way such wars and massacres are historicised; an arch, glancing appraisal of the passing of stories from mouth to mouth. “Am I a poem?” asks Lucy Ellinson’s compelling one-woman chorus, begging the question of how individuals are memorialised, be it by Homer or Euripides or the modern media. It is a question that is as relevant to the depiction of perceived “victims” in present day conflicts as it is to the reading of ancient literature.

And Bird certainly isn’t shy about underlining Troy’s contemporary resonances, as she and director Christopher Haydon wrench Euripides’ characters out of the ancient world and into an unspecified modern realm. This Troy may still have gods in the form of Roger Lloyd Pack and Tamsin Greig’s pre-recorded deities, but it also has smartphones, machine guns and anti-monarchy blogs. This tension between ancient faith and modern secularism emerges repeatedly throughout the piece, with the fickle and malicious gods worshipped by the Greeks and Trojans becoming an apt reference point for the shifting, false idols of our age.

Just as the chorus, cannily pared down to Ellinson’s pregnant woman of the people, wonders whether she is merely “the idea of woman”, this interpretation also feels its way around what it means to be a woman caught in the conflict of motherlands. Louise Brealey’s dazzling, chameleonic portrayal of three of Troy’s pivotal female figures – Cassandra, Andromache and Helen – functions to illustrate three different facets of how women have been painted in the Troy legend: as hysterics, helpless victims and temptresses. The clinical surroundings of Jason Southgate’s striking design, meanwhile, define these women through the role of motherhood, mocking them with the hope of offspring that will be ripped from their breasts while childish paraphernalia laughs down from the walls.

But for all its brutally poetic language, searching interpretation and sheer winding power, there is something that grates a little within this reimagining. Rather than teasing out timeless threads from Euripides’ tragedy and applying these to our current predicament, Bird’s adaptation grasps and rips with both hands. As a result, the stubbornly imposed contemporary parallels, such as Talthybius’ use of Western democracy’s rhetoric to justify the Greek invasion of Troy, sit somewhat disjointedly with the Classical references preserved from Euripides. Meanwhile, the pointedly modern gadgets and glib, incongruous video sequences – as predictably enjoyable as Lloyd Pack and Greig’s performances are – have a touch of smugness that threatens to blunt the potency of the whole.

Heavy-handed as it may be, however, it’s hard not to be enthralled by the antiseptic horror and devastatingly intense performances. There is also something profoundly timely in Troy’s excess and destruction that speaks louder than all of the grinningly placed modern references. As the doomed spires of Ilium look more and more like the towering skyscrapers of late capitalism, perhaps this fresh, harrowing vision of Troy is a Cassandra for our times.